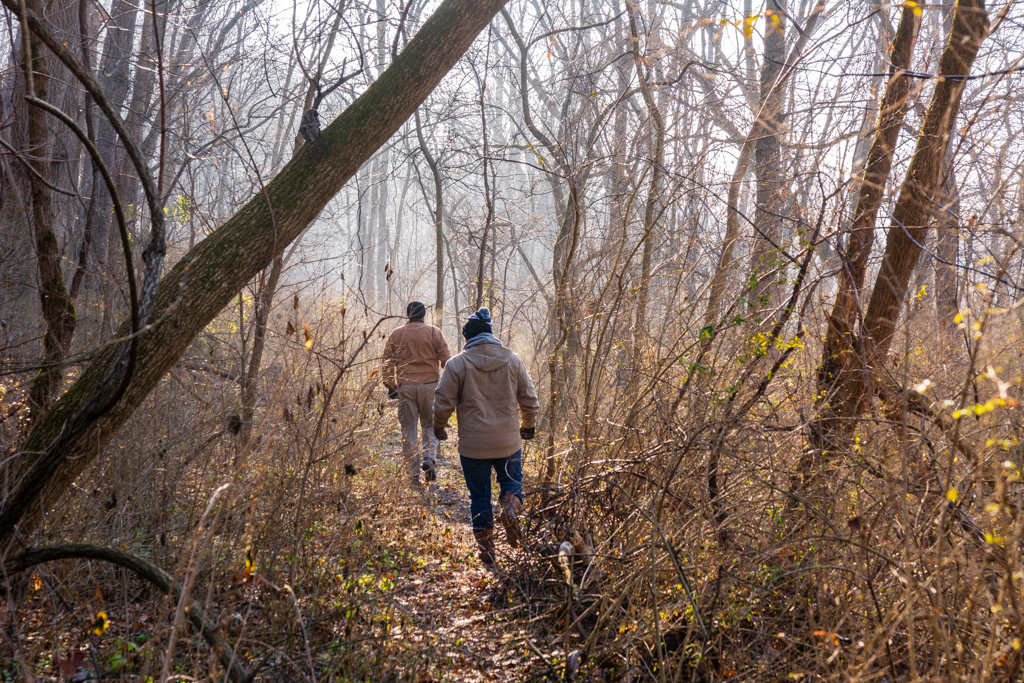 Lancaster Township Engineer Benton Webber and I have been researching information about the Conestoga Navigation Company that operated a slackwater navigation system on the Conestoga River between Lancaster and the Susquehanna River. The company operated from 1829 until about 1857. The first lock in the system was located along the New Danville Pike just south of Lancaster. You can access the area from the New Danville pike at a pull off near to the historical marker. But one day last December we decided to see if we could hike in from the other side of the river starting at Buchmiller Park.

We parked at a pavilion in the park and headed downhill toward the river. It wasn’t too long until we came across an old railroad bed that once ran along the east side of the river. We were able to follow that bed downstream to the site of the lock and dam.

As we approached the location of the lock and dam we could see some concrete pillars that once carried rail cars over the river from a flour mill on the other side. This was Levan’s Flour Mill.

From this side of the river, and at this time of the year, it is easy to see the remains of the dam. It must be noted that the dam that served the lock had been completely rebuilt to support the operations of the flour mill. We assume that some of the stonework from the original lock was used to construct the mill race but it’s hard to tell for sure which parts belonged to the lock and which were re-purposed for the mill.

Here is Benton explaining the operation of Slack Water Navigation on the Conestoga at this location.

Many people are surprised to learn that the Conestoga was once navigable between Lancaster and the Susquehanna. For about four decades, freight and passengers traveled up and down the river from Lancaster to the canal along the Susquehanna, making a shorter and faster route than taking the same goods overland to Columbia. Unfortunately, the Conestoga Navigation Company was never very successful due in part because the Conestoga is prone to flash floods which made the expense of maintaining the system prohibitive.

One comment on “A Hike to the First Lock”