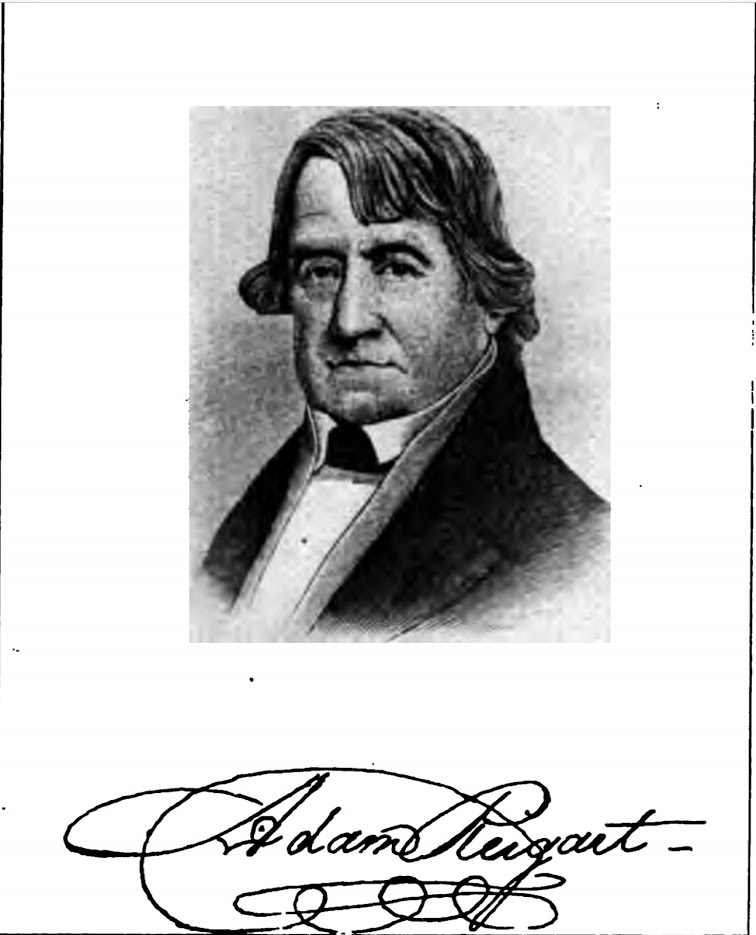 Adam Reigart, Jr. (1765-1844) was a prominent Lancaster citizen who seems to have been involved in many organizations around the borough/city. He apparently was well respected by his peers because he seems to have been elected president of every new enterprise in the town. His father, Adam Reigart Sr. (1739-1813), was an active participant in the American Revolution. He became Lieutenant Colonel of the 1st Battalion of the Lancaster County Militia and served under the command of George Ross. The elder Reigart was the proprietor of the Grape Hotel in Lancaster which was an important meeting-place for various committees meeting on business related to the American Independence.

In the early 1800s, the burgesses of Lancaster decided they ought to have their own bank located in the town and so they formed the Lancaster Branch of the Pennsylvania Bank. The bank opened on May 18, 1803 and Adam Reigart was elected president. The bank was located at the northeast corner of King and Prince streets. (Riddle 106) A few years later, in 1807, the Lancaster and Susquehanna Insurance Company formed and Reigart became that company’s first president.

In 1813, the Union Fire company of Lancaster underwent a reorganization. The fire company, which was formed in the 1760s, was only informally organized up until this time. The number of members was increased to fifty (from forty) and the first election of regular officers was held. Adam Reigart was elected president. Reigart served as the Union Fire Company president until his death in 1844. (E&E 388)

When the Conestoga Navigation Company formed in 1825, Adam Reigart was elected president. On July 27 of the same year, Lancaster welcomed the Revolutionary hero, General Lafayette, to the city with great fanfare. Lafayette visited with Reigart in his home at 323 West King Street presumably in honor of Adam’s father who was deceased by that time.

Reigart remained president of the Conestoga Navigation Company until it was sold to Edward Coleman in 1833. Reigart operated a hotel at the head of navigation called “Reigart’s Landing” Adam Reigart, Jr. died on May 2, 1844 at the age of 78.