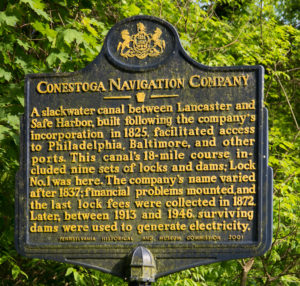 The boats would then travel down the S&T canal to Havre de Grace and from there they could continue on down the bay to Baltimore or they could navigate through the Chesapeake & Delaware canal (which opened in 1829) then up the Delaware to Philadelphia. There were nine locks between Lancaster and Safe Harbor. Each lock was 100 feet long and 22 feet wide and was accompanied by a dam which piled up the water into ponds to facilitate navigation. The river bottom was dredged to ensure a minimum of four feet of draft. A tow path was cleared on the river bank so that non-powered canal boats could use the system.

The Conestoga canal started at what was called “Reigart’s Landing” named after Adam Reigart who was the first president of the Conestoga Navigation Company. This was located at then end of E. Strawberry Street near to where the entrance to Lancaster County Park is today. The entire length of navigation from here to Safe Harbor was just short of 18 miles with a drop of 64 feet.

The Conestoga Navigation Company enabled goods like coal, lumber, grain, and whiskey to be shipped to Baltimore and Philadelphia faster and cheaper than it took to transport them overland to Columbia.  A hogshead of whiskey could be shipped to Baltimore for $1.50 or to Philadelphia for $1.75.  In addition to the mule powered canal boats, the steamer “Conestoga” provided passenger service between Lancaster and Philadelphia. The steamer Conestoga was seventy-five feet long with separate cabins for gentlemen and ladies. The steamer ceased operations in 1856 when the railroads became the dominant form of transportation.

After about 30 years of operation, the company ran into financial troubles, and finally ceased operations in 1857.

What follows is an outline of the nine locks with their approximate locations and some images of their remains.

The first lock had a lift height of seven feet. The first lock was located along the New Danville Pike (rt 324) across from the historical marker pictured at the top of this post. No remains of the original lock have survived but at this location you can still see the remains of the head race for Levan’s Flour Mill and the piers of a railroad bridge that was used to transport flour from Levan’s Flour Mill to a rail line on the other bank.

The second lock was located where Second Lock Road crossed the river. It had a lift of six feet. A covered bridge at this location was burned by vandals years ago. Remains of the lock can still be seen on private property just upstream from the foundations of the old bridge.

The third lock was located just downstream of where Millersville Road (Rt 741) crosses the river. It had a seven foot lift.

Lock four had an eight foot lift and was located where Slackwater Road crosses the river just upstream from the old Slackwater covered bridge. The bridge was burned down but the abutments remain.

Lock six was located across from Boy Scout road near to the mouth of the Little Conestoga. It had a nine foot lift. No remains are visible today.

Lock seven was about a mile below lock six where the River makes a bend as Conestoga Blvd. cuts across the corner. It was seven feet high. No remains are visible today

The remains of lock eight can be seen in Safe Harbor park just upstream of the River Road bridge. It had a six foot lift.

Lock nine was located at the Susquehanna River. This lock has been obliterated by construction related to the Safe Harbor dam. The final (or first depending on your direction) had an eight foot lift.

It’s fun to imagine what it was like for the lower Conestoga to be able to support commercial navigation. Nine dams with their associated ponds above them. Barges being towed by mules along the towpath. Flat-bottomed steamers carrying passengers and freight up and down the river. The dams are all gone now and the locks are just a fading memory. But I don’t mourn their passing. They are artifacts from an era when modification of a natural resource to facilitate commerce was considered progress. I personally believe that the river is in a much healthier, more natural state now than it had been during the late 19th century. And when I see people kayaking on the river or fishing along its banks I am encouraged that we have a natural resource that will be enjoyed by future generations.