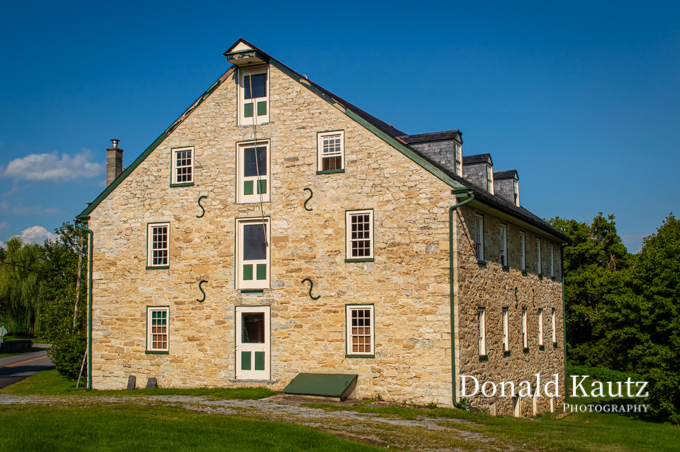 Welcome to Mill Monday! It’s time to feature another one of Lancaster County Pennsylvania’s water-powered grist mills. Today we visit the Lime Valley Mill in West Lampeter township. This mid-19th century structure has been well preserved, and the nearby covered bridge still carries traffic over the Pequea Creek.

Waterpower for the mill came from a six-foot dam on the Pequea Creek. A 500-foot headrace brought the water to the mill. The mill boasted three turbines and could process 75 barrels per day. A 100-foot tailrace returned the water to the creek.

The Lime Valley Covered bridge, located just below the mill was built in 1871 by Elias McMellen. It is 103’4” long and is 13 feet above the water.

The mill was again sold at public auction in 1900. Harold Hunsicker became the next owner. Hunsicker installed turbines in 1905 and added a poured concrete addition in 1915 to handle bulk storage.  In 1939, J. Lloyd Sheaffer purchased the mill. Lloyd’s son, Reid took over the ownership in 1946 and operated it until 1961. The mill was advertised for sale in February of 1962. The Lancaster Milling Company operated the mill through 1972 when the mill suffered some damage in Hurricane Agnes. The mill sat idle until the Lancaster Milling Company sold the property at public auction on November 12, 1980.

Roy and Helen Wagner were the next to own the property. They improved the dam, head race and tail race and converted the mill to generate electricity for Pennsylvania Power and Light. Roy Wagner died in 1986 and his son, Gerald took over operations. The mill generated electricity until 2002 when a spring storm caused the dam to collapse.

The mill entered a new phase in its history in 1996 when John and Karen Hoffmeister bought the property. John Hoffmeister was the president of the Shell Oil Company. The Hoffmeisters founded the Lime Valley Mill Foundation and hired Dale and Allyson Brian to manage the property. The foundation’s mission was “to educate young people on the virtues and techniques of an agricultural vocation.” The mill was open for tours and the Lime Valley Arts and Crafts show ran every Christmas from 1997 until at least 2014. In 2012, Dale and Allyson Brian were presented with the West Lampeter Township Historic Preservation award for their work at the mill.

The mill has served as a private residence since 2017. The mill is located at 914 Lime Valley Road, Willow Street, PA.

Information and photographs of this mill may be found on this website at https://donaldkautz.com/mills/lime-valley-mill/.