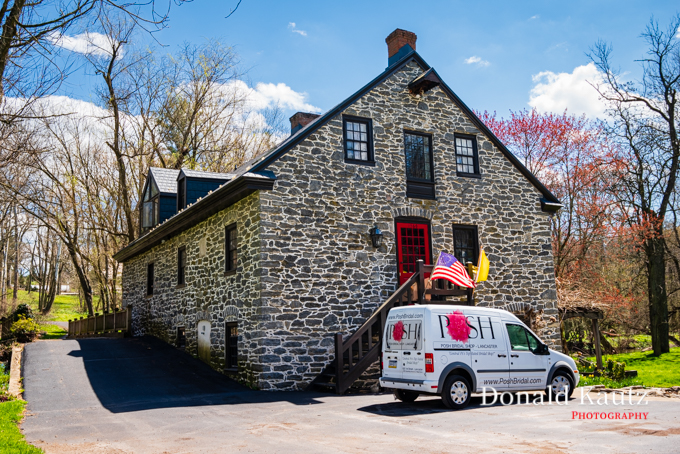 It’s Monday morning! Time to feature another one of Lancaster County Pennsylvania’s water-powered grist mills. Today we travel back to Manor township and visit another mill on the Little Conestoga just downstream from Maple Grove. This is one of the oldest mill sites in the county, dating back to before the revolutionary war. The mill is the Rock Furnace mill, more commonly known as Stoneroad’s Mill. Functioning as a private residence today, it even comes with its own private bridge.

Andreas Kauffman had also built a bridge over the Little Conestoga adjacent to the mill back in 1770. After over 30 years of service, the first bridge needed to be replaced. Christian Musselman rebuilt the bridge next to the mill around 1805.

Christian’s son, David Musselman, became the next owner. David sold the property to John Lintner and Christian Hershey in 1833. Ten years later the property was sold to John M. Bear. In 1846, John Schlott became the next owner. After John’s death, his heirs sold the mill to John Stoneroad in 1851. The mill had a two-foot-high dam on the Little Conestoga leading to a short, six-foot headrace. One turbine powered the mill which could generate about ten barrels of flour per day. A 250-foot tailrace returned the water to the stream.

John Stoneroad operated the mill for 47 years. During John’s tenure, the bridge was again replaced, this time with a covered bridge in 1868.  John’s son Henry S. Stoneroad and his wife Amanda assumed ownership in 1898. The mill had two grinding burrs at first and later a third set of stones was added. By 1933, a new bridge a little further north, carried traffic from the Millersville Pike to Maple Grove or the Rohrerstown Road. The covered bridge across the Little Conestoga saw little use anymore so the county decided to dismantle it. Henry Stoneroad would have nothing of that, so he purchased the bridge to preserve it. This made the Stoneroad’s Covered Bridge the first privately owned bridge in Lancaster County.

After Henry’s death, the mill was offered for sale at public auction. Ben Mann purchased the property for $2850 on May 26, 1941. Ben turned the mill over to his son, George S. Mann who began to renovate the property. George was the owner of A. K. Mann and Son Tobacco Company and served as president of the Lancaster County National Bank. In 1947, George Mann offered the mill to the Lancaster County Art Association to use as their headquarters. The Association turned the upper floor of the mill into an art studio. The held oil painting classes in the mill on Monday and Tuesday nights. The mill became a popular subject for oil paintings. After the LCAA moved their headquarters into downtown Lancaster in 1950, the Mann’s continued to make the mill property available for community groups. The Lancaster Cotillion Club, a social ballroom dancing club, held their annual picnic at the mill. The Lancaster County National Bank held corn roasts for their employees on the grounds. The Lancaster Country Day School and the LGH Auxiliary held events at the mill.

In 1972, that infamous nemesis of bridges, Hurricane Agnes, flooded the mill and destroyed the historic covered bridge. The bridge was replaced with an open steel bridge with a wooden floor. George Mann died in 1974. In 1976, Brian Langsett purchased the mill from Arthur Mann and converted the mill into his family home. The current owners purchased the property in March of the year 2000.

Information and photographs of this mill may be found on this website at https://donaldkautz.com/mills/stoneroads-mill/.