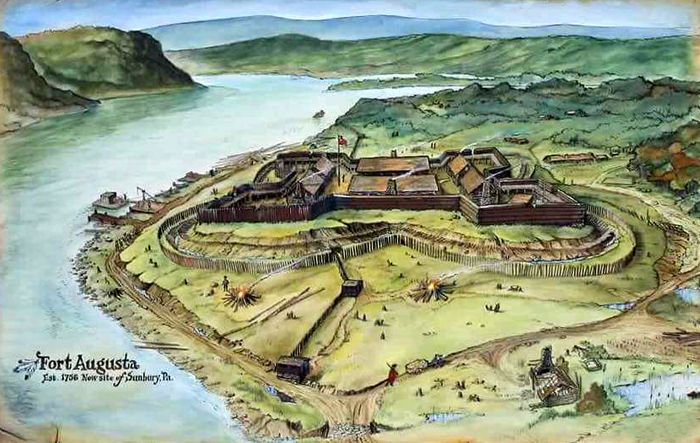 The Story of Seneca George

During Pennsylvania’s colonial period, the colony’s magistrates relied heavily upon a small group of people who could act as translators and help to negotiate agreements between Pennsylvania and the original occupants of the land, principally the Lenape (Delaware) and the Iroquois (Five Nations). Some of these translators were Europeans who had learned something of the Indian culture and languages. The most notable of these was the German immigrant, Conrad Weiser. Conrad had spent some time among the Mohawks in New York as a teenager and had become fluent in that language. The Mohawks were the eastern-most tribe of the Iroquois. Other translator-ambassadors were natives who had learned English or could at least translate between the different Iroquoian languages. One of these was an Oneida chief named Shikellamy who helped to broker many of the dealings with the Iroquois. Shikellamy served as a guide to Conrad Weiser in many of his travels through Pennsylvania and New York. Another one of these Indian ambassadors was a Seneca elder named Osternados whose Christianized name was Seneca George.

Osternados was a good friend of Conrad Weiser and was firmly loyal to the English. Around 1750, the Iroquois leadership gave him the task of managing the relationships between the Iroquois and the Conoys, Nanticokes, and other groups on their southern border. This included the British of Pennsylvania. Based in Otsiningo on the North Branch of the Susquehanna, Osternados (Seneca George) travelled all around the region from the Iroquois capital at Onondaga to Philadelphia and Lancaster for treaties. During the turbulent times of the French and Indian war, Seneca George took refuge in Harris’ Ferry (present day Harrisburg).

When Conrad Weiser died on July 13, 1760, Seneca George performed the condolence ceremony for him, drying Pennsylvania’s tears.  At the ceremony Seneca George said, “We, the seven nations and our cousins, are at a great loss and sit in darkness as well as you, by the death of Conrad Weiser, as since his death we cannot so well understand one another.” In 1767, seeing the encroachment of white men on ancestral lands, Seneca George began inviting Nanitcokes and Delawares from Maryland and New Jersey to settle among the Iroquois in Otsiningo to be out of danger from the White People, who having taken their lands, were forgetting their obligations, and were treating all Indians as their enemies.

Seneca George had one surviving son who was the apple of his eye. He was grooming the boy to become his replacement after he died. He brought the boy, about 10 years old at the time, to the Pennsylvania State House in 1761 to proudly present him as his future successor. The boy was known to the colonists as “Young Seneca George”.

Early in the summer of 1769, Young Seneca George and some friends left their homes in Otsiningo and headed down the river on a fishing expedition. They found a suitable spot just below the forks of the Susquehanna, present day Sunbury. There, on the west bank, they set up a bark hut to reside in during their stay. They fished at night, placing a fire in a basket held over the water which attracted the fish to the surface where they could be caught in nets. The location may have been good for fishing, but as it turned out, might not have been the safest place for a small band of Indians to set up camp.

One evening in early July, the Indians watched from their hut as a canoe full of colonists approached the shore. There was a fire in the canoe, indicating that the colonists were fishermen also. Suddenly, without warning, the man in the stern pointed a gun at the group on the shore and before anyone could respond, he fired, killing Young Seneca George instantly. “You have killed one of us,” his companions cried but the colonists dumped their fire into the water and paddled down river.

The Indians went up to Shamokin to look for someone in authority. They found a magistrate named Turbutt Francis and told him their story urging Francis to launch a manhunt. Colonel Turbutt Francis (Tubby) was a young man who had fought with the British against the Ohio Indians during the war. Francis was an ambitious man and had his sights set on replacing George Croghan as deputy superintendent. Francis knew Seneca George and was aware that the murder of his son would present a difficult diplomatic problem. He also saw this as an opportunity to enhance his career. So, Francis immediately organized a search party which traveled down the west bank looking for the canoe that the Indians had described. They located the canoe at a rude, one room inn further down the west bank. There the Indians were able to identify the gunman as a man named Peter Reid. Magistrate Francis took the suspect into custody and delivered him to the jail at Lancaster. Then Francis sent a message upriver to inform the victim’s kin and invite them to a Condolence Ceremony.

After this, Francis travelled to Philadelphia to consult with the leaders there. The leadership in the capital were concerned with various issues on the frontier. There were colonists from Connecticut settling in the Wyoming valley claiming rights to that territory. The treaty at Fort Stanwix had moved the frontier west but they needed someone to survey the land and they needed Indian guides and observers to attend. Now they had to prosecute this murder quickly knowing that it was commonplace for suspects to be rescued from prison before they stood trial. And if the murder did go to trial, the only eyewitnesses were the Indians, whose testimony would not be admitted. And, more worrying, if this news got to the Iroquois in the wrong manner, they could be looking at another Indian war. Young Seneca George was not just any Indian, he was a member of a family that had been loyal to the British.   When the elder Seneca George was informed of his son’s death he was, as you can imagine, terribly grief stricken.

The Condolence Ceremony was set for Saturday, August 19 at Fort Augusta in Shamokin (present day Sunbury) at the forks of the Susquehanna. Colonel Francis arrived with presents of black cloth, dark colored silk handkerchiefs, a dozen shirts, four pairs of shoes and buckles, three kegs of rum, along with paint, tobacco, and brass kettles. Seneca George arrived with an Onondaga leader named Genquant, the Conoy headman Kanak’t (Last Night), and twenty-two young men. Also present were in addition to Colonel Francis the reverend William Smith, the Delaware chief, Isaac Stille, a scribe and about fifty colonists. Seneca George would speak in Seneca, Last Night would translate from Seneca to Delaware, and Stille would translate from Delaware to English. Then, when the English spoke, the translation chain would operate in the other direction. The ceremony got off to bit of a rough start with the Pennsylvania delegation expressing dismay at the size of Seneca George’s delegation while the old Indian expressed his displeasure that the ceremony had not started with the customary meal to refresh the travelers.

On Sunday, Reverend Smith held Divine Services at the fort. Seneca George let him know that, since his people worshipped the same God as the white people, they would attend services also. The congregation at the fort that morning numbered more than 125 persons with Isaac Stille translating for the Indians.

As the conference convened on Monday, Francis, with a string of wampum in his hand, conveyed Pennsylvania’s condolences. He ceremonially buried the body, presented the handkerchiefs to dry the Indian’s tears, and scraped away “all the Blood that has lain on the Ground or may have stained the Bushes.” Then Francis brought out the presents as “a Token of our Affection for you and to comfort your Hearts.” Seneca George closed the conference stating that he had heard Governor Penn speak through Colonel Francis and that he would give his answer tomorrow.

On Tuesday, however, Seneca George sent word that the Indians were not ready to give their reply and requested another day to think about it. When the council reconvened on Wednesday, Seneca George was too grief-stricken to speak so he asked his good friend and translator, Last Night, to deliver his response. Last Night’s speech followed the traditional pattern, invoking the memories of William Penn and the friendship that was established between the natives and the British. He urged that the friendship begun by their grandfathers should endure. He then turned to more personal issues, requesting recompense for one of his steers that had been slaughtered for food during the council at Fort Stanwix the previous fall. He also requested provisions for their journey home. Colonel Francis promised to provide rum, flour, and ammunition for their trip home. The mood in the hall was one of cheerfulness and the Indians expressed satisfaction with the condolences expressed by the Pennsylvania delegation.

But before the meeting could break up, one more person wanted to speak. Frederick Weiser, the oldest remaining son of Conrad Weiser, rose to speak. He began by expressing condolences to Seneca George from himself and all of Conrad’s children for the death of his son. The he went on to say that “our tears have run down our cheeks in greater abundance because a cousin of ours, the Sister’s Son of our Father Conrad, has been suspected of doing the mischief.” Frederick assured Seneca George that the Weiser family would not stand in the way of the trial and he wanted to ask that there would be no ill will against Conrad’s family because of the actions of this one man.

Seneca George was shocked at this news. He was not aware that his son’s murderer was a relative of his old friend. By Iroquois reckoning, a sister son was a closer relative even than Frederick. Seneca George sat in silence for a few minutes with tears running down his cheeks. Then Seneca George rose to speak. He remembered is good friend Conrad Weiser and he mourned his son whose death, he said, “almost entirely cut away my heart.” But he assured Frederick Weiser that this matter would not be remembered against his family. Then he ran up to the table, grasped Frederick’s hand and said “I have no ill-will to you Mr. Weiser. None to you Colonel Francis, nor to any of you,” shaking hands as he went down the table. Then he turned to the colonists in the gallery, spread wide his arms, and said, “nor have I any ill-will to any of you my brethren the English.”

The colonists in the room were stunned, and tears flowed as they exclaimed about the “manly spirit of forgiveness and reconciliation” that the Indian conveyed. His actions and gestures were so moving that their meaning was clear even before his words were translated. For a brief moment it seemed, Colonist and Indian saw each other as people. But the moment was transitory. It would not be long before warm handshakes would be replaced with more bloodshed and many more tears of anguish.

The council adjourned and Seneca George and his delegation made their way back up the river toward their homes in Otsiningo. But he never made it home. Near Wyoming, they ran into some rough water and the old Seneca went under. The reports from Philadelphia were that he fell out of his canoe. The Indians claimed that he jumped.