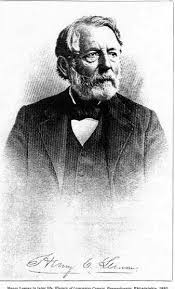 Henry E. Leman was born in Lancaster on March 8, 1812, the eighth child of Jacob and Catherine Leman. Jacob served with the Pequea Rangers during the Revolutionary War. Jacob’s father, Henry’s grandfather, was Daniel Leman who was a French Huguenot that settled in Paradise Township with the Lefevre and Ferree families. Daniel married one of the Ferree daughters. After the war, Jacob started a brewery and a family of ten children.

At the age of 16, Henry was apprenticed to Lancaster gunsmith, Melchior Fordney for three years. Fordney produced rifles in Lancaster at 508 South Queen street from 1807 until 1846 when he was tragically murdered by an insane man with an axe.

After his apprenticeship, Henry worked for Philadelphia gunsmith, George Tryon, as a journeyman gunsmith for about three more years. Tryon was the grandson of another French Hugeuenot who came to America in 1773. The Tryon gunshop made arms for the Revolutionary war and later for the Indian trade. Henry worked for Tryon until he opened his own gun shop in 1834.

Henry’s experience with the Lancaster and Philadelphia gunsmiths gained him the skills to produce a good quality Pennsylvania rifle at a competitive price. He produced 250 rifles during his first year of operation. 50 of those first pieces were sold to John N. Lane in St. Louis for use in the Indian trade. In 1837, he received a contract from the government for 500 rifles. The rifles were flintlocks with 42-inch barrels. Each rifle had a woolen cover and included a mold, wiper and charger. The price was $14 each. They were packed in boxes of no more that 25 rifles in each box. In the years that followed, he made more than 1000 rifles for the Northwest Indian trade in addition to a wide variety of civilian rifles.

Leman’s forge and rifle boring mill was located on the east bank of the Conestoga River about a hundred yards above the confluence of the Lititz Creek at a place called “Pointville”. This area is now called “Pinetown”. Henry lived in nearby Catfish, now called Oregon. While the barrels were forged in the mill on the Conestoga, the stocks and lock works were made in a factory in Lancaster. Henry abandoned the mill on the Conestoga in 1850 and built a new steam powered factory at the corner of Walnut Street and Cherry Alley in Lancaster. In 1850, Henry employed 34 persons. The new factory could produce several thousand rifles per year.

Henry married Anna Dubois in 1851. They lived on Duke Street in Lancaster where they raised their four children. Two of the sons eventually worked for their father. The 1850s were busy times for gunsmiths due to the gold rushes and westward expansion. The Leaman rifles achieved a reputation of being some of the best rifles for the frontier. In 1860, Henry employed 62 workers and produced 5000 rifles. He was not heavily involved with producing arms for the Civil War but he did do some work for militia use at that time. His main factory product was sporting rifles.

After the war, business was good as the country focused on settling the west. Several Indian treaties involved presents of muzzle-loading weapons for the Indians. Leaman designed a special, inexpensive model known as the “Lancaster Rifle” that became extremely popular with the government and other companies who were trading with the Indians on the western plains.

In 1873, Henry moved his factory into larger quarters on the southeast corner of James and Christian streets. Operations continued there until Henry died in 1887. Henry Leaman was the most productive of the Lancaster riflemakers. During his life, his factory produced more than 100,000 guns.

If you would like more information about Conestoga River History, you may be interested in my Book on the topic. The Conestoga River: A History is available for $26.20 including tax and shipping. See the Book link on the menu at the top of the page.