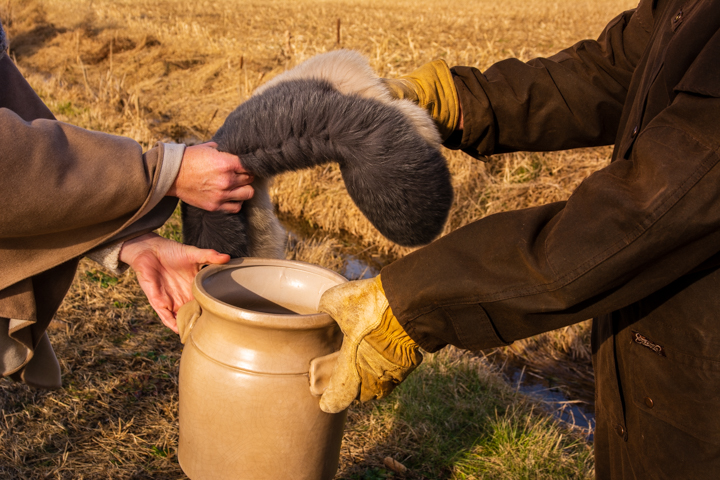 During the seventeenth century continuing into the eighteenth, the fur trade was big business among the Swedish, Dutch, French, and English traders. Many people wanted to get in on the action. There was intense competition between the governors of New York, Pennsylvania, and Maryland, each wanting to keep their ports busy. And then there were the French Canadians who, it was rumored, wanted to conquer the territory to their south.

These traders were real frontiersmen, travelling through the wilderness and living off the land. The fur traders were an adventurous lot, rugged outdoorsmen who spent half their time bartering with the Natives in the wilderness and the other half bartering with the European settlers who wanted their goods. They were in the vanguard of the clash between the city-based, manufacturing societies of Europe and the hunter-gatherer societies of the New World. In many cases, the first white people with whom the Natives came into close contact were the fur traders. Their impression of white people was often formed by these encounters for better or worse. During their work, the traders often learned the native languages and, in some cases, married native women. This made the traders valuable as interpreters when the colonial governments needed to hold conferences with the native tribes.

One of these early traders in Pennsylvania was Captain Jacques LeTort. Jacques and his wife Anne originated in Northern France. The LeTorts were French Protestants, Huguenots and as such were forced to leave France in 1685. The LeTorts fled to London where they made plans about where they would settle. One option was Brandenburg, Germany where the Elector was welcoming Protestant refugees. Another option was William Penn’s colony in the New World where Sir Matthias Vincent offered Jacques LeTort a position looking after his estate of 10,000 acres on the Schuylkill River recently purchased from Penn. Vincent along with Dr. Daniel Coxe, the king’s physician, were buying land in Pennsylvania with the goal of establishing a fur trading venture called the “New Mediterranean Sea Company” which would bring Canadian furs from Lake Erie via the Susquehanna and Delaware rivers to Philadelphia.

Captain LeTort chose the latter option and sailed promptly, arriving in Philadelphia in 1686. Unfortunately, Sir Vincent died in June of 1687 and his widow did not want to pursue the operation. Dr. Coxe purchased Sir Vincent’s property and leased four hundred acres to LeTort. Coxe was still very optimistic about the future of the New Mediterranian Sea Company. However, the Governor of New York set a message to King James II claiming that fur trade on Lake Erie, the Susquehanna, and Delaware would severely impact his income from the port of New York. William Penn did not want to anger the king, so he did not sign the deed for the new company. Dr. Coxe retained Captain LeTort as his Indian fur trade agent even as many other London traders vied for a piece of the market.

LeTort’s plantation on the Schuylkill was near present day Spring City, Pennsylvania and about five miles above the mouth of the French Creek. It was ideally situated to capitalize on the fur trade coming down the Schuylkill from New York as well as those coming from the Susquehanna via the Conestoga canoe trail that connected to the French Creek. In 1690, the captain decided that he needed to travel to London to have some face-to-face talks with his sponsor, Dr. Daniel Coxe. This was a very dangerous thing to do at that time because England and France were at war. English and French ships regularly attacked and captured each other. A French Protestant like Jacques LeTort on an English ship risked spending the rest of his life as a galley slave if his ship would have been captured. During the three years that Jacques was in London, his wife, Anne, held down the fort as it were. Alone, except for her children and a few servants, Madame LeTort carried on the fur business in her husband’s absence. During this time, her oldest son, James, came of age to be apprenticed. James LeTort was apprenticed to John King in Philadelphia for five years “either on Board or on Shore” beginning in 1692.

In July of 1692, Martin Chartier came up from the Potomac with a group of Shawnee Indians and settled near the mouth of the Susquehanna. Madame LeTort along with two other French traders named Peter Bizaillon and Captain John Dubrois began to do business together to trade with Chartier’s Shawnees. While Jacques LeTort was in London, Peter Bezaillon made his headquarters near the LeTort plantation on the Schuylkill. In December of 1692, Madame LeTort, Peter Bizaillon, and Captain Dubrois supplied the Shawnees with trade goods in advance with expectations of a good return of furs. Madame LeTort sent with the Indians an account book detailing how much the Indians owed upon their return. This book was wrapped up on a blue linen cloth. For this, Madame Letort was accused of espionage because her competitors, perhaps jealous of her connections with the Western Indians, reported to the authorities that she was sending secret messages to the French by way of the Indians. When the Indians returned with their furs as payment for their debts, two of Anne Letort’s neighbors, a Swede named Peter Yocum and an Englishman named Polycarpus Rose, came with rum and tried to coax the Indians to bring their furs to them. Anne Letort chased the intruders off with a horsewhip saying there is no room for English rogues or Swedes on her property. On December 19, 1693, Peter Bisaillon and his brother Richard, along with Anne LeTort and Captain Dubois, were accused of espionage and carrying on secret correspondence between the Shawnees and the French of Canada.

Meanwhile, Captain Letort did run into trouble on the high seas. His ship was boarded by the French, and he was captured and taken to prison at Thoulon. There he “narrowly escaped the galleys but after a long and hard usage got into England.” Once in London he met with Dr. Coxe again. Coxe had sold his holding in West Jersey as well as his land on the Schuylkill (including the LeTort plantation) to the West Jersey Company. LeTort returned to Pennsylvania with a contract to trade with the Indians on the Schuylkill.

On February 6, 1694, Jacques LeTort and his wife, Anne, appeared before the Pennsylvania Governor and Council to address the charges made against her. After hearing the charges and the LeTort’s responses, the Council dismissed all the charges as unworthy of further notice. LeTort was asked to give surety that he would inform the council of anything he observed regarding the natives and enemies of the country.

After this, Jacques LeTort and Peter Bizaillon redoubled their efforts for developing fur trade on the Schuylkill using their connections with Martin Chartier’s Shawnees. This time they raised the ire of the Governor Nicholson of Maryland who also wanted a piece of that business. Again, LeTort and Bizaillon were cast as dangerous enemy aliens but Governor Markham of Pennsylvania defended the Frenchmen this time. On June 26, 1696, Governor Markham wrote to the Governor of Maryland noting that LeTort had accumulated a large number of pelts and was planning to make another trip to England as soon as it could be arranged. This is the last record we have of Jacques Letort. We don’t know if he died before his ship left, although that is unlikely because there is no record of the settling of his estate. Perhaps he was lost at sea, or maybe this time he did not escape the galleys.

In 1697, Anne LeTort moved to Kent County, Delaware near to Martin Chartier’s headquarters, with her son James. James had finished his apprenticeship by this time and entered the fur trade business probably in league with Peter Bizaillon. In 1698, the Shawnees relocated to the mouth of the Pequea Creek. The remainder of the Susquehannocks, now called “Conestogas”, also built a town nearby on Penn’s Manor.  About that time, Anne and James also relocated to Conestoga so they could be close to both groups of natives. Peter Bizaillon also moved into the area at this time. Martin Chartier arrived in Washington Boro around 1716. The three families, LeTort, Bezaillon, and Chartier continued their trading business on the Susquehanna for about twenty years with Penn’s agent James Logan. Martine Chartier died in 1718, Anne LeTort died in 1720 and Bezaillon moved to his farm in Coatesville in 1729. After his mother’s death, James Letort joined Chartier’s son, Peter, at Chartier’s town (Tarentum) on the Allegheny.

For more information on the Fur Trade, see my articles on Martin Chartier and A Portage Reenactment.

Benson, Evelyn, The Huguenot LeTorts, First Christian Family on the Conestoga, Journal of the Lancaster County Historical Society, Vol. 65.  No. 2.