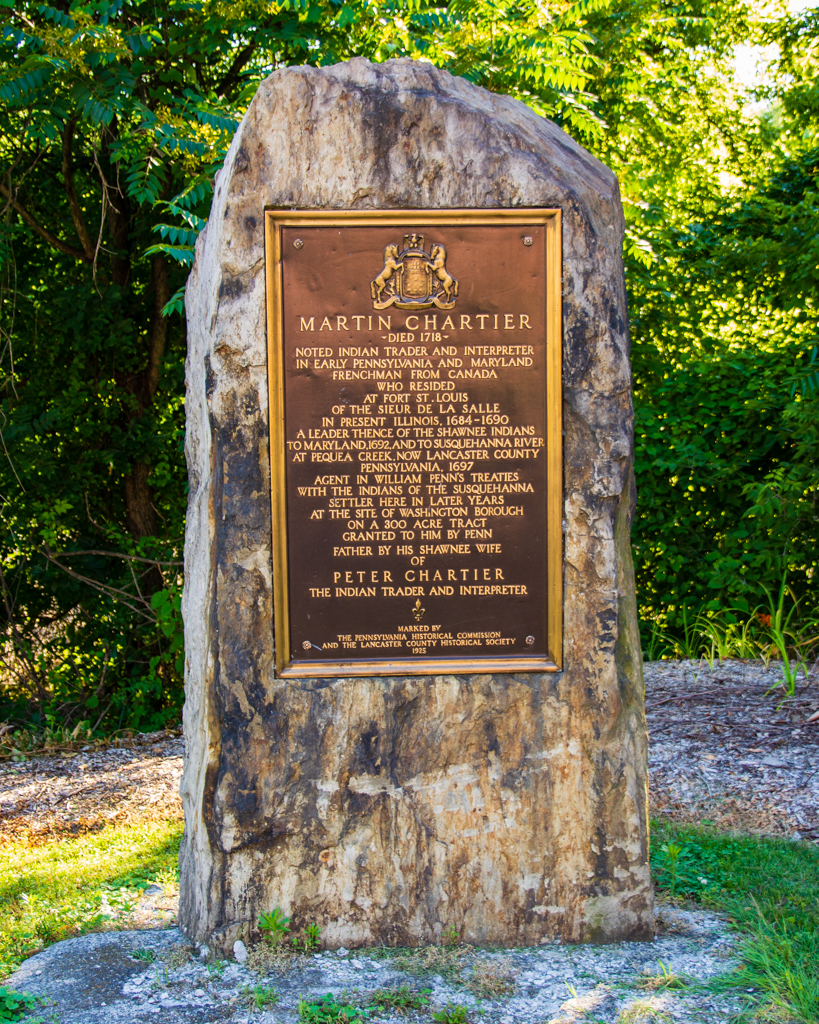 This is the second installment on my series about the fur traders that had some connection to the area of Pennsylvania that would later become Lancaster County. These traders were the frontiersman that explored the territory and interacted with the native Americans that inhabited the area at the time. They learned the native languages and lived among them at times. In this article we will look at the story of Martin Chartier, who not only lived among the Shawnee tribe most of his life, but also married the daughter of the chief.

Martin Chartier was a French Huguenot who emigrated to New France in 1667 with his father, brother, and sister. Martin was twelve years old when he arrived in the New World. This was 18 years before Louis XIV revoked the Edict of Nantes, forcing all the Huguenots to either convert to Catholicism or leave the country. On the long voyage, he became acquainted with Jesuit named Rene-Robert Cavelier. This connection would turn out to have a pivotal impact on his life as we shall see shortly. Martin lived in Montreal for during his teenage years. In 1672, seventeen-year-old Martin and his brother accompanied the French explorer Louis Jolliet on an exploration of the Great Lakes. Two years later, Martin again accompanied Jolliet on a trip to the Illinois territory where he became acquainted with the Shawnee Indians, then living along the Wabash River (in present day Indiana). Something (or someone) must have caught his eye there because he returned to the Wabash in the following year and married Sewatha Straight Tail, who was the daughter of chief Straight Tail Meaurroway Opessa. A daughter was born to Martin and Sewatha in 1676.

In the meantime, Rene-Robert Cavelier left the Jesuit order due to “moral weakness” and was granted a seigneurie, that is, a manor, on the Western end of the Island of Montreal. This manor, called Lachine, was the region where Martin Chartier’s Father, Uncle, and Grandfather were living. Cavelier sold land grants on the manor and took the title, Sieur de La Salle, or Lord of the Manor. I won’t take the space here to tell of all of LaSalle’s exploits, some real, some likely fabricated, because this article is about Martin Chartier. It is difficult to determine exactly when Chartier joined LaSalle’s crew, but he first appears helping to build a 45-ton barque called “Le Griffon” on the upper Niagara River. Le Griffon was launched in August of 1679.

Chartier travelled with La Salle on his trip across the Great Lakes in 1679. They crossed to the Illinois river where La Salle began construction of Fort Crevecoeur (Broken Heart) in 1680 (present day Peoria, IL). In March of 1680, La Salle left on foot to go back for more supplies leaving Henri Tonti in command. On his way up the river, La Salle saw another location on the Illinois (Starved Rock) that he thought would be a good location for a fort. When Tonti headed upriver to investigate this site, the rest of the men, instigated by Chartier, mutinied, and burned Fort Crevecoeur to the ground.

Chartier escaped and headed to upstate New York where he allegedly lived among the Esopus people, a branch of the Lenape living in the Catskills, for a few years. (The historical marker at his gravesite in Washington Boro states that he resided at Fort St. Louis. Some sources make this claim, but this writer believes it to be unlikely that he would have been hanging around a French Fort when he was wanted for mutiny. In his own testimony to the Maryland authorities in 1692, he reported that he was living with the Esopus People along the Hudson at this time). He eventually did return to Montreal, probably to visit his father, but he was now an outlaw in that place. In 1685, he left Montreal in search of his wife and, now adolescent, daughter. The Shawnees were nomadic which made it difficult to know where to find them, but he managed to track them down in what is now Tennessee, after travelling some 900 miles in 40 days by canoe. When he found them, the Shawnees made him very welcome. His second daughter, Mary Seaworth (Sewatha) Chartier was born in 1687.

Chartier followed the nomadic Shawnee as they moved about the region. In 1689, He opened a trading post at French Lick on the Cumberland River at the current site of Nashville Tennessee. In the same year, Martin’s father, uncle, and grandfather were killed when a large group of Mohawks attacked the Lachine settlement on Montreal Island. Martin’s son, Peter Chartier, was born at French Lick in 1690. After Peter’s birth the family moved again and established a trading post at the place where the Ohio, Monongahela, and Allegheny Rivers meet (present day Pittsburg). They spent about two years at that location. Then, in the spring of 1692, he led a group of 192 Shawnee and several displaced Susquehannocks to Cecil County, Maryland on the Potomac River. After being defeated by the Iroquios, the Susquehannocks allied with the Shawnee and wanted to use the Susquehanna to transport furs. Martin wanted to use the rivalry between the English and the French to benefit his adopted tribe. The Maryland officials were suspicious of Chartier and arrested and jailed him as a spy. The officials there recorded that Martin had two Indian wives, but there are no other indications that he had more than one wife. Perhaps they saw his, now 16-year-old, daughter and assumed she was his second wife. He was released from prison in October 1692. Feeling unwelcome in Maryland, Chartier and the Shawnees moved up the bay to the mouth of the Susquehanna in 1694.

By this time, the fur trade had become so well developed that there was a glut of furs going to Quebec, causing a drop in prices.  Chartier joined up with his friends Peter Bisaillon and Jacques and Anne LeTort to run a smuggling operation that brought furs from Detroit to Albany and from there to Pennsylvania where they could be sold to the British at higher prices.

In 1698, the Shawnees moved again to the mouth of the Pequea Creek where Martin set up another trading post. The Shawnees invited the remnants of the defeated Susquehannocks to live with them. Representatives of the Shawnees and Susquehannocks met with William Penn in April of 1701 to formalize this relationship. They built the village of Conestoga Town on land that Penn had reserved for them. Martin served as interpreter at conferences held in Conestoga in 1711 and 1717. In 1717, James Logan awarded Chartier a large tract of land from the mouth of the Conestoga several miles up the Susquehanna. Martin Chartier died in 1718 and was buried on his farm at Washington Boro. After his funeral, James Logan foreclosed on the farm claiming that Martin owed him money. He later sold the farm to Stephen Atkinson. This forced Martin’s son Peter to move west to the Allegheny River. Martin’s gravesite was accidently rediscovered in 1873 by a later owner of the property. He was apparently buried in traditional Shawnee style. Today, a historical marker stands on his grave site is at the corner of River Road and Charlestown Road.

For more information on the Fur Trade, see my articles on Jacques LeTort and A Portage Reenactment.