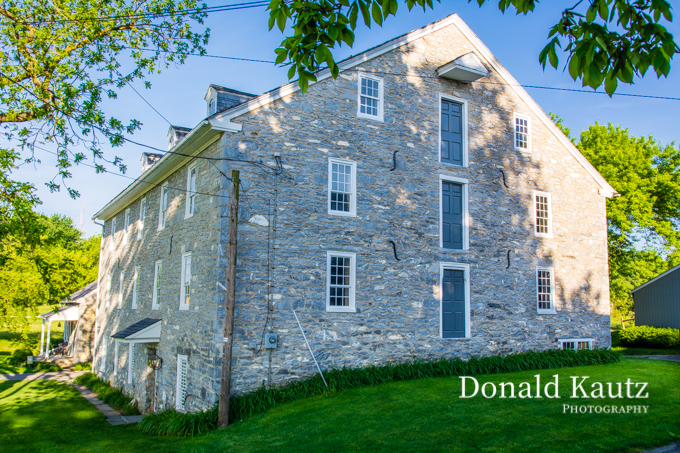 Welcome another edition of Mill Monday! Every Monday morning, I feature a grist mill located in Lancaster County, Pennsylvania. Today we will visit Manor Township and a mill that is part of a small village. The village of Windom. Windom consists of a farmhouse built in 1780, a bank barn, a miller’s house, a tavern, several other farm buildings, and of course, the mill which was built in 1810. Windom was listed on the National Register of Historic Places in 1994.

The farm, which consisted of one hundred acres, was first patented in 1719 to a member of the Hans Herr family. This was the same year that Christian Herr built his house in Willow Street. A date stone on the miller’s house reads 1763 although it is likely that the current structure was built from stones from a previous building. Samuel Herr, a descendent of Hans Herr, was the owner in 1769. The first mill on the property began operations ten years later in 1779. Samuel Herr’s son-in-law, Jacob Kauffman, assumed the ownership in 1780. The first mill burned down in 1810 and was replaced by the current limestone structure. The stone masons who built the new mill held a contest to see who could make the most perfect corner. The $10 prize went to the builder of the south-east corner. That corner includes an altitude mark stating that the stone is 307 feet above sea level.

The water source for this mill came from a four-foot dam on the West Branch of the Little Conestoga situated near to Charlestown Road. An approximately 2700-foot headrace brought water to a pond near the mill. A narrow sluice brought water from the pond into the mill. An internal overshot wheel powered three sets of French burrs and could produce ten barrels of flour per day. An 80-foot tailrace returned the water to the creek.

John Landis purchased the mill at sheriff sale in 1825. It remained in the Landis family for over a century, earning it the name “Landis Mill”. In 1890 the mill began operations as a cider mill. Farmers could drop off their apples at one end and drive around and fill their barrels with freshly pressed cider at the other end. During harvest time a long line of wagons waited for their turn at the mill. The road was constructed with humps that allowed the teams to rest while waiting. In 1894, the mill was being used as a creamery.

The postal service opened a post office in the mill in 1899. The name Windom was chosen as the name of the village, possibly named after the village of Wyndham in Wales. In 1899, the mill produced 100,000 gallons of apple cider. David H. Landis operated the cider mill in 1916. The mill was also used for chopping corn. 26,000 gallons of cider were pressed in 1926. The mill was also processing 5,000 pounds of corn meal per week that was sold to the Armstrong Linoleum plant to be used to manufacture linoleum. The mill ran for the last time in 1949 after which it was converted into a chicken house.

Paul and Edith Rohrer purchased the mill complex from Fannie Noll in 1965. The mill is presently owned by a partnership made up of Paul’s son and grandsons called “Windom Manor Farms”. The mill was the location for the “Scream in the Dark” held by Lancaster Youth for Christ in 1969 and again in 1970. The mill sat vacant for a while, then in 1980 it was used for storage. In 1988, a cabinet maker opened a shop in the mill. A flood in 1995 filled the lower floor of the mill with four feet of water. After the flood, the mill was refurbished and in 1996, the mill was leased by artist Linda Lease who opened a framer and gift shop called “Art Classics”. In 2004 the space was used as a taxidermist shop. At the present time, the mill is in excellent condition.

More information about this mill including more photographs can be found on this website at windom-mill.