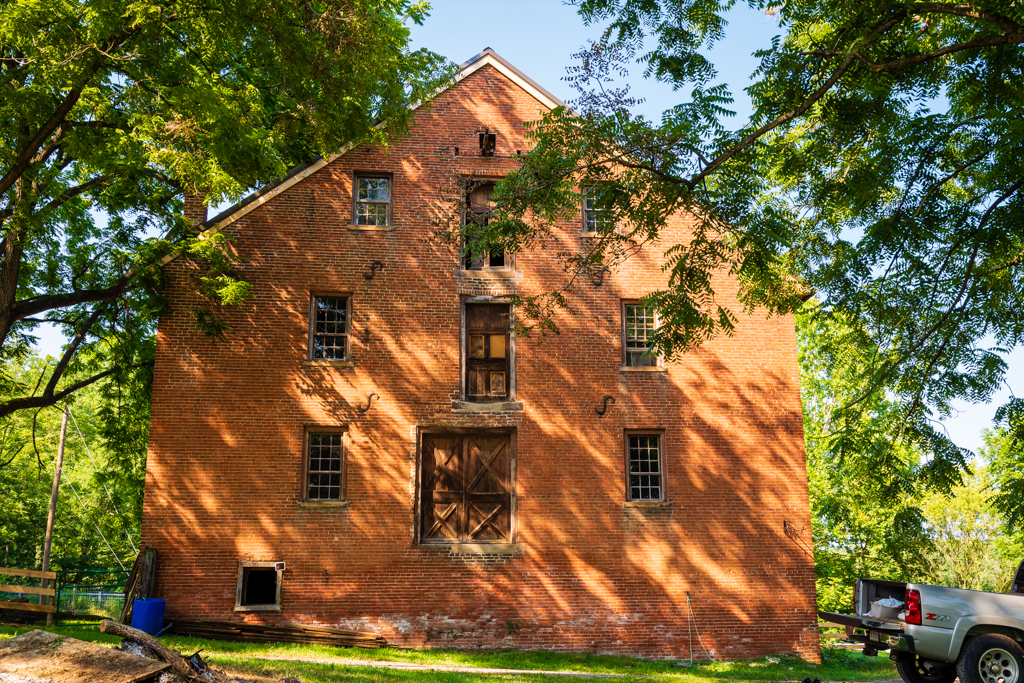 Welcome the sixteenth edition of Mill Monday! Each week I feature one of Lancaster County, Pennsylvania’s remaining water-powered grist mills. This week we return to East Donegal Township and visit another mill that was built around the time of the American Revolution, the Donegal Mill and Plantation on Donegal Springs Run.

The land on which the mill was built was first settled in 1720 by David Byers. He squatted the land at first but eventually acquired ownership from the Penn family. Abraham Stouffer bought the property in 1773. Stouffer built the first mill, a three-story brick one around 1775 and owned it until 1783 when he sold to Jacob Kreybill. Kreybill built the mansion house in 1790. Jacob ran the mill until he died in 1810 and then it passed to his son, Jacob, Jr. who ran the mill from 1810 to 1832. In 1810, the Kreybill’s donated land for a church which became the Kreybill Mennonite Church. In 1815 the mill was 40 by 36 feet and had two stories. In 1830, Jacob & Elizabeth Kreybill built a new brick mill. Jacob died two years later, leaving the mill to his infant son, Jacob E. Kreybill. From 1832 to 1850 the mill was operated by the executors Jacob and Peter Nissley. In 1850 Jacob E. Kreybill assumed control of the mill from the executors and operated the mill until 1870.

The mill had a 2,500-foot headrace that brought water from a 17-foot-high dam on the Donegal Springs Run. The mill was powered by an overshot wheel and could produce 10 barrels per day. A 1,300-foot tailrace returned the water to the creek.

In 1870 the mill left the Kreybill family when it was sold to Isaac Breneman. Two years later, the mill was sold to Jacob Musser, then in 1878 it sold again to Christian H. Nissley. Christian transferred the property to Henry Nissley who in turn transferred it to Levi Nissley in 1880. At this time the mill, now called the “Marietta Mill”, was powered by both water and steam. In 1915, the Levi Nissley cider mill made 12,800 gallons of cider. Finally in 1925 it was purchased by Wolgelmuth and Strickler. The mill ceased operation in that year. The mansion was sold in 1930 and fell into a state of disrepair until it was purchased by George Brown II in 1941. The road originally ran in front of the mill before it crossed the creek. In the 1950s, the road was realigned to run behind the mill, obliterating the head race.

In 1967, the property passed to George’s daughter, Joanne Brown Zink and her husband Franklin. The Zinks began renovating the mansion after Hurricane Agnes flooded the grounds in 1972 and opened it to the public as a museum called the Donegal Mills Plantation in 1974. The Donegal Mills Plantation was listed on the National Register of Historic Places in 1978. The grounds served as the venue for an annual Scots-Irish festival each year in September. In March of 1982, Joanne Zink opened the Donegal Mills Inn in the mill building. The main dining room was in the basement and the first floor was available for group events. The second floor was a museum featuring artifacts found on the grounds that were the remains of a rural Indian village dating to the early 1700s. Throughout the 1980s, the Donegal Mills Plantation was open for tours with costumed guides leading visitors through the mansion and grounds.

The restaurant closed in 1995 but then, in 1998, Joanne Zink opened another restaurant in the mansion house called the Coach and Four Restaurant. The plantation remained open for tours until at least 2001 when Joanne Zink became ill and could not continue the business. In 2003, the Zinks auctioned off the antiques and collectables in the hopes of collecting enough money to maintain the house and grounds. Then it sat vacant for several years. Joanne Zink died in 2008. The plantation was offered at auction on May 15, 2010. Joanne’s son, Franklin B. Zink, Jr. ended up with the property. Franklin Zink sold the property to Eli Fisher in 2017.

Today, the mill is in fair condition, the mansion house appears to be in good condition.