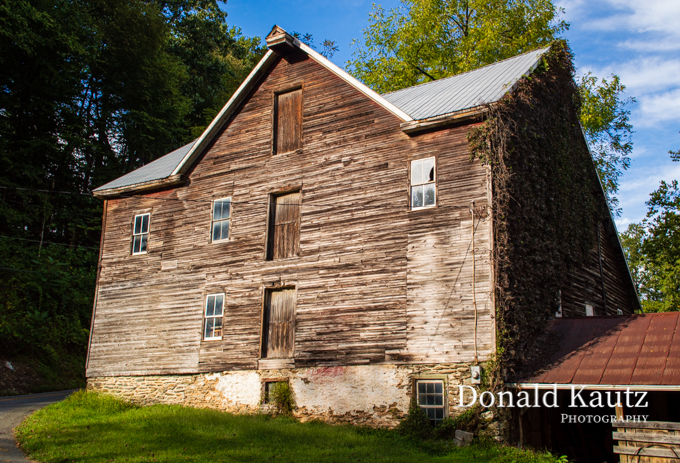 Welcome to Mill Monday! It’s time to feature another one of Lancaster County Pennsylvania’s water-powered grist mills. This week features the Hess Mill in Drumore Township, also known as the Penrose Mill. This was a very busy sawmill and cider press during the late 19th century.

The first mill was built of stone in c1743 by George McCullough. McCullough also built the Drumore mill in the same year. These two mills were the first to be built on the Fishing Creek. Later, it passed through many hands until it was purchased by Israel Penrose in 1827.

It was known as the Penrose Mill for about forty years. Benjamin & Joseph Penrose were the owners in 1833 and they built the new mill in 1842. Benjamin Penrose was listed as the owner in 1875. During that time, it did more business than any mill in southern Lancaster County. It was operated day and night. The mill produced flour and cattle feed. Also connected with the mill were a sawmill and a cider press. Logs were floated down the Susquehanna River and were hauled to this mill by the hundreds and sawed into various kinds of building materials.  Most of the houses and barns that were built in that part of the county during the period were furnished with lumber that had been sawed at the Penrose Mill and were roofed with Peach Bottom Slate.

The water source for the mill was a ten-foot dam on the Fishing Creek which led directly into the mill. The mill was powered by an overshot wheel and could process 25 barrels per day. A 300-foot tailrace returned the water to the creek.

John M. “Jack” Hess became the proprietor in about 1868 and became the owner after Benjamin Penrose died in 1882. From that time the mill was known as the Hess Mill. “Jolly Jack Hess” as he was called, ran the mill until 1904 when his son John Hess, Jr. took possession of his father’s mill. The mill continued to operate until at least 1916. John Hess Sr. died in 1918 and the mill was offered for sale at Sheriff’s sale on November 29, 1919.

William Cramer was the next to buy the mill. It sat idle for a few years and had fallen into a state of decay when Cramer began to refurbish it. Cramer brought the mill back to operating condition and began to grind flour again in 1924. The mill closed for good in 1927. Today it is used as a barn and for storage.

The mill is located at 1699 Furniss Road, Drumore, PA.