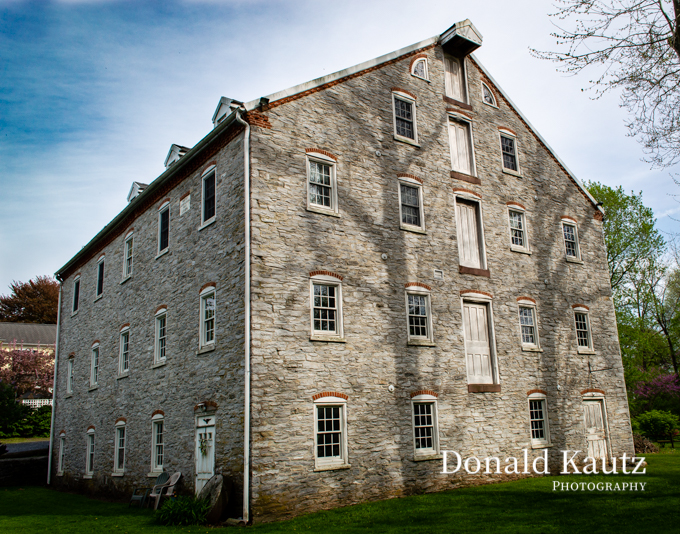 Welcome to Mill Monday! It’s time to feature another one of Lancaster County Pennsylvania’s water-powered grist mills. Today we feature the Brownstown (aka Wolf’s) mill on the Conestoga River in West Earl Township.

The first mill on this site was a log mill built c1730 by a miller with the last name of Wenger. The second mill was a stone mill built by Holtzborn in 1750. That mill was purchased by John Wolf 1811. Jacob and Lavina Wolf had ownership in 1856 when they built the current mill. Joel Wenger owned the mill from 1864 until about 1870. Joel’s son, Clayton Wenger owned and operated the mill until it closed in the early 20th century. Wenger converted the mill to generate electricity in 1903. It supplied electricity to Brownstown, Talmage, and Farmersville until 1923.

Water power for the mill came from a five-foot dam on the Conestoga Creek (as it was then called). The water traveled along a 750-foot headrace to the mill which was powered by two turbines. The water returned to the Conestoga via a 150-foot tailrace. Capacity was about 75 barrels of wheat per day.

The mill stood idle for a few years until it was purchased by Lancaster Insurance Broker, Paul G. Murray. Murray and a partner operated it as a weaving mill. Later, the mill was leased to Lancaster Leaf Tobacco who used it for storage until it was purchased by Alice Wolf in 1967. Mrs. Wolf opened a gift and antique shop in 1970. Alice Wolf sold the mill in 1994 to Dale and Naomi Hartman. The mill is currently in use as a residence.

Information and photographs of this mill may be found on this website at https://donaldkautz.com/mills/brownstown-mill-2/