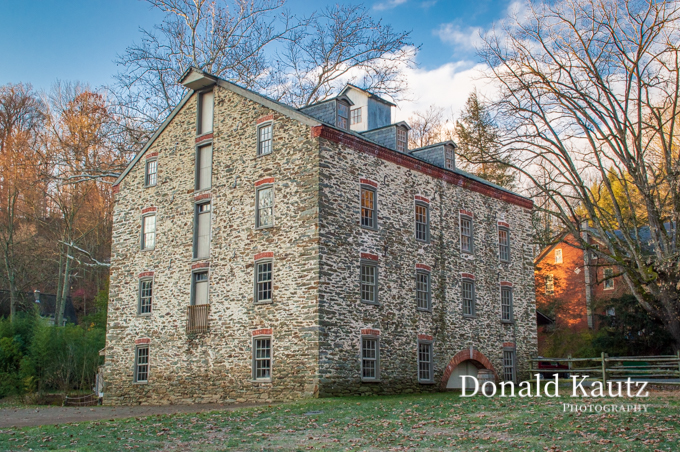 It’s Monday morning! Time to feature another one of Lancaster County Pennsylvania’s water-powered grist mills. Today I will feature a popular destination on the Pequea Creek in Conestoga Township. Sickmans mill has featured a campground and tubing excursions on the Pequea for many years although, like many things, the pandemic interfered with operations for the last several years. Here is the story of Sickman’s mill.

A short distance down the Pequea from the mill there is a deposit of magnetite ore. On January 23, 1881, the Pequea Magnetic Iron Mining Company was organized to mine and concentrate the magnetic ore. It was the first attempt of this nature in the United States. The mines were in Martic Township on the East side of the creek while the processing plant was on the West side in Conestoga Township. But despite much effort and expense, the firm did not operate very long, ceasing operations in 1897. Safe Harbor Iron and Steel was formed in 1912 in another attempt to mine the ore. A rail line ran about 4.5 miles to Safe Harbor. But it also failed. Mining operations ceased in 1912 and the machinery was dismantled.

On October 18, 1930, the mill was put up for public auction. The mill was listed as a 4-story flour and grist mill. Conditions were made known by Allen Sickman, Warren Sickman, and Harry Warfel. Warren Sickman retained the ownership after the sale. Warren was the proprietor when the covered bridge at the mill was washed out by a flood in 1938. The covered bridge was replaced by a two-span steel bridge. Warren also rebuilt the dam in 1948. The new dam was made of concrete and was eight feet high. Warren operated the mill until 1967. Warren died in 1978.

Michael Z. and Mary Lou Gress bought the mill at public auction in May of 1967. The Gresses opened the mill as a tourist attraction in 1968. The mill was still operable at that time. The Gresses offered guided tours of the milling process. They began to offer camping and tubing on the Pequea Creek in the 1970s. A watercolor rendering of Sickman’s mill by Sheryl Brinkman was featured on the 1984 edition of Multiple Sclerosis Christmas cards. The first annual Harvest Fest at the mill was held in 1985. The Harvest Fests featured live music and tours of the mill. In 1989 the Gresses added a haunted mill attraction that was a popular event every year at Halloween.

Larry and Faye Kipp bought the mill in June of 1995. The Kipp’s continued the camping and tubing operations in the summers and the Haunted Mill and woods in the fall. Unfortunately, flooding caused by heavy rains washed out the mill dam on January 19, 1996. The flood waters inundated the first floor of the A-Frame home on the site causing the Kipps to move their possessions from the first floor to the second floor. The couple had to climb in and out of windows to move their goods upstairs with the help of neighbors. Three weeks later, the house was dried out and the mud was out of the mill but with the dam gone there was no way to supply the 10,000-gallon water tank that provided water for the campground. The cost to rebuild the dam was prohibitive.

Ronald and Lisa Malkin were the owners in 2006. The Malkins continued the camping and tubing business for several years until Erik and Trina Armstrong became the owners in 2010. They also continued the tubing operation. Two runs were available, a short, one-hour float on inner tubes or a three-hour paddle. They added a tent behind the mill to use as a wedding venue. The mill was not running but was open for self-guided tours.

Information and photographs of this mill may be found on this website at https://donaldkautz.com/mills/sickmans-mill-2/.

This is the next to last installment in the Mill Monday series. It has been gratifying to see all the positive responses to these articles. But all good things must come to an end. See you next week for the final Mill Monday!