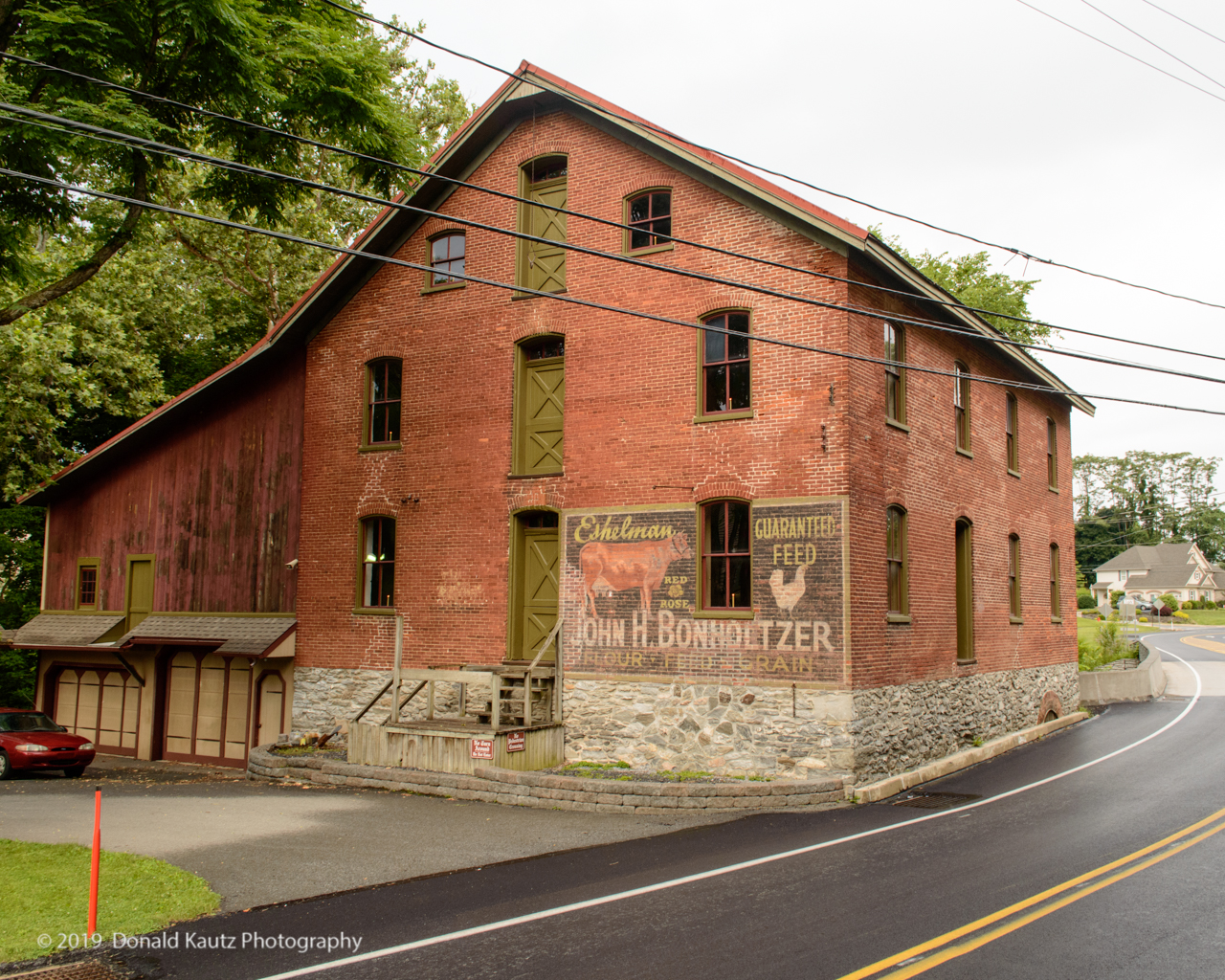 If you travel on the old Strasburg Pike, you have probably noticed an old mill that is sitting almost on the road, about one half mile south of the Lincoln Highway. On the side of the mill is painted a fading sign that advertises John H. Bonholtzer’s Flour and Feed Mill. This is the Millport Mill which once housed the Fertility Post Office. Here is its story.

In 1767, Felix Binkley built a Georgian-style sandstone home and a stone flour mill on the east side of the road from Strasburg to Lancaster. This is across the road from the current mill. Felix built his home and mill on land that his father, John Binkley had received from Felix Landis as part of a Penn Grant that was allocated to Landis in 1719. The mill remained in the Binkley family for nearly sixty years.

Jacob Charles became the next owner sometime around 1813. An ad for the sale of some horses and farm equipment was listed in the Lancaster newspaper on October 22, 1813, to take place at Jacob Charles’ mill, formerly Binkley’s mill, on the Mill Creek. In 1833, the Charles estate included a grist mill, a sawmill and 50 acres of land. In 1838, the property was purchased by Daniel Potts who was a widely known citizen in the Strasburg area at the time. Daniel Potts was the owner for nearly twenty years. It was during Daniel Potts’ time, in 1844, that Joseph Elliot and Robert Russell built a single-span Burr Truss covered bridge over the Mill Creek next to the mill.

At this time, the village around the mill was known as Millport. The Millport Road joined the Strasburg and Millport turnpike just north of the bridge across the Mill Creek. The Millport hotel was located near the intersection. Sometime during the middle of the nineteenth century a post office opened in the mill. The post office was called Fertility and the area around the mill assumed that name as well. Samuel Curtis became the new owner of the mill in 1857. Curtis owned the mill for twenty years followed by D. B. Landis in 1877. The 1875 atlas shows the Fertility and Greenland Post Offices and the grist mill on the east side of the road owned by S. Curtis and a sawmill on the west side of the road.

The next person to become the owner was Mr. H. B. Groff. Groff was living in the Eastern Shore of Virginia when the Civil War broke out and he was pressed into service as a teamster for the Confederate Army. He feigned sickness and managed to get out of service. Then, he came north are took up farming at a village located just east of the Strasburg and Millport turnpike called Greenland. Later, he moved to Lancaster where he was a member of the firm, Groff & Westaefer, which operated a grain elevator at Lemon and Water streets. In approximately 1883, he traded his interest in the elevator to D. B. Landis in exchange for the mansion and mill at Millport.

H.  B. Groff tore down the old sawmill that was across the road from the old mill and built a new mill on that side of the road in 1883. The new mill was a large brick structure, 54 by 40 feet, four stories high with a cupula above. Groff installed the latest roller mill machinery and added a steam engine to augment the waterpower. As the new mill was nearing completion, the old stone mill was demolished and some of the stones were used to build the boiler room for the new mill. The new mill had a capacity of 75 barrels of flour per day. It sported a 1000-gallon water tank to supply water for the house and stable. It also had a convenient hose ready for the emergency of a fire. Groff’s son, Emlen F. Groff was the postmaster at Fertility.

Then, on June 29, 1889, disaster struck. Sometime during the night, a fire started on the second floor. By the time the Groffs became aware of the fire, the building was already fully involved. The 1000-gallon water tank was useless because the flames were so hot that no one could approach the building. The heat could be felt at the hotel across the creek. Fortunately, there was no wind, so the covered bridge and nearby hotel were spared, but the mill was a total loss. The grain in the mill burned for two days.

The mill was insured, enabling the Groffs to rebuild the mill by November of the same year albeit with one less story. This is the structure that is still standing today. H. B. Groff died in 1893. Following his death, ownership was transferred to Isaac B. Groff.

The mill remained a very successful business. Isaac B. Groff operated it into the 1920s. The covered bridge next to the mill remained in service for 81 years until it was replaced with a steel bridge in 1925. Groff sold the mill to the Mowrer brothers sometime in the mid-1920s. The Mowrer Brothers kept the mill until about 1950 when they sold it to John Bonholtzer. From that time the mill assumed the name “Bonholtzer’s Mill”. Bonholtzer ran the mill until the late 1960s. John’s son Richard Bonholtzer was the owner in 1977.

Arthur L. Reist, the teacher at Conestoga Valley noted for his collection of Conestoga Wagons owned the mill in 1978. Then the mill was offered for sale again in January of 1984. The next people to become the owners of this historic site were Jerry and Mary Ann Landis who already owned the old mansion across the street where they have been operating The Olde Millhouse Shoppes since 1976. (See https://oldemillhouse.com/) In 2001, the Landises transferred the ownership of the mill property to their daughter Lisa and son-in-law John Blowers.