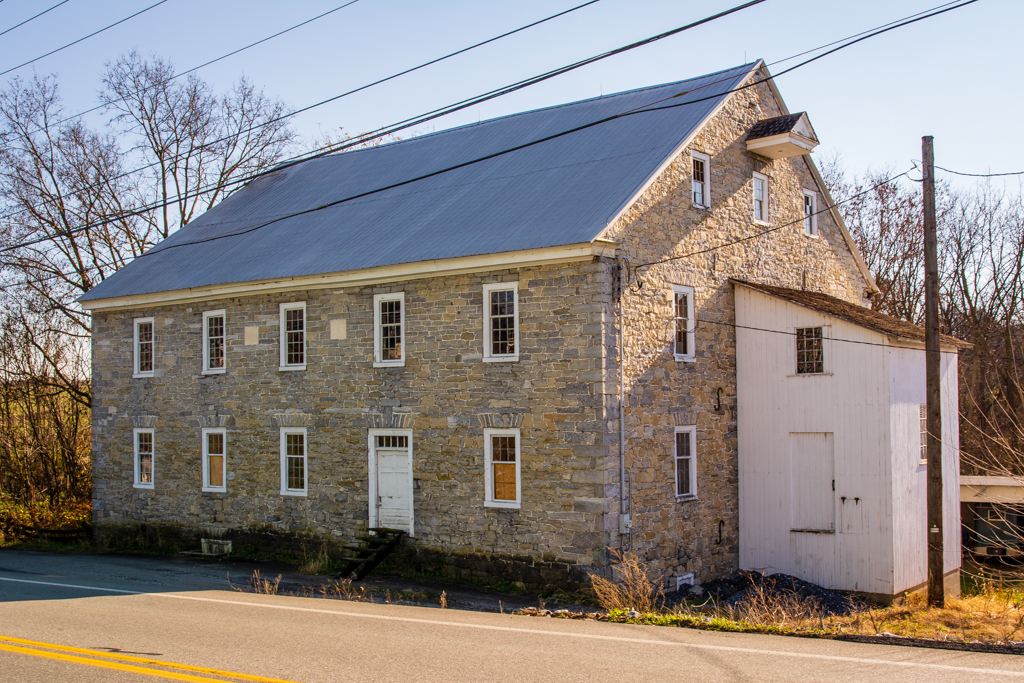 Captain John Galbraith, from Ulster, Ireland, immigrated to Pennsylvania in 1718 and built a grist and sawmill out of logs on the Donegal Creek in 1720. This mill was located on a heavily travelled road that ran from the fur trading posts on the Susquehanna to join with Peter’s Road in Mount Joy. Anderson’s Ferry was founded in 1727, and the road became busy enough that Galbraith applied for a license to brew beer and keep an “ordinary” (that is, a tavern). He was a captain in a battalion of Scotch-Irish that protected the settlers from Indian raids. Captain Galbraith died in 1753 and the mill and ordinary were sold to John Bayly. Bayly was one of the founders of the town of Falmouth further up the river. Bayly operated the mill and the ordinary until his death in 1794. The farm and mills were then purchased by Heinrich Schaerr (aka Henry Share).

The town of New Haven was formed on the Susquehanna east of Anderson’s Ferry in 1803. The next year, James Anderson IV founded the adjacent town called Waterford. It was in that year that Henry Share tore down the Galbraith/Bayly mills and built a three-story merchant mill on the south side of the road. New Haven and Waterford joined together in 1812 to become incorporated as the town of Marietta. While the British Royal Navy was operating a blockade to prevent American maritime trade, landowners were laying out building lots in the area west of Marietta in a new section called “Irishtown”. Henry Share laid out some of the lots in Irishtown along Bridge and Biddle streets. In 1813, Share called for an “artificial road” to be built from the Anderson’s Ferry, Waterford and New Haven turnpike road, past his mills, to intersect with the Lancaster, Elizabethtown and Middletown turnpike at Richland and Mount Joy. This road is now Anderson Ferry Road (Route 772). In 1814, Henry Share built another mill, this one at the confluence of the Chickies and Little Chickies Creek. This second mill was called the Marietta Mill and stood along what is now the Marietta Pike. That mill is no longer standing.

Henry Share offered the plantation, including the grist mill, for sale by auction on March 7, 1822. The mill was purchased by John Stauffer who operated the mill for almost 20 years. Then, on Jan 27, 1841, Stauffer advertised the mill for sale. The sale ad read, “Grist and Merchant Mill situated in East Donegal Township, one mile east of Marietta on the pike leading from Marietta to Mount Joy. The mill house is built of limestone, 48 by 58 feet, three stories high having 4 run of stone, two of which are French Burrs, with overshot water wheels. Within a mile of the Pennsylvania Canal.”

The mill drew water from an eight-foot-high dam on the Donegal Springs Run that led to a 1,300-foot headrace. Power was provided by overshot wheels and the water was returned to the creek through a 1,000-foot tailrace. The mill’s capacity was ten barrels per day.

The mill is located at 615 Anderson Ferry Road, Marietta, PA.

More information about this mill including more photographs can be found on this website here.