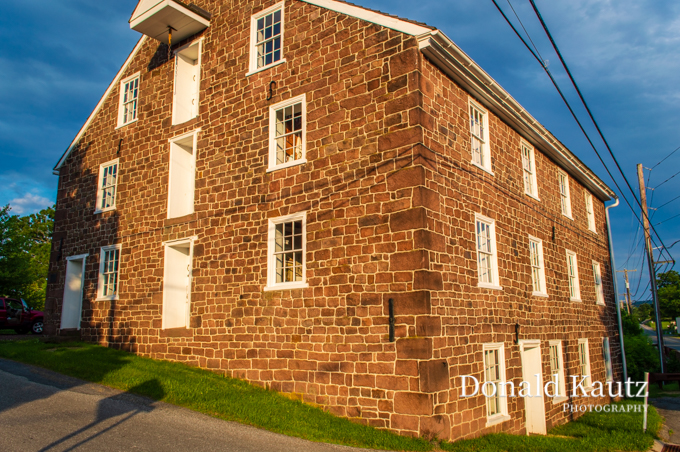 Christian Good built a log mill and dwelling house on this site 1737. The home also served as a Mennonite Meeting house. Peter Good was the owner from 1751 to 1757, his wife assuming ownership after he died. The mill passed to Christian Good in 1769, and then to Hans (John) Good from 1772 to 1790. John Good erected the second mill c1780, replacing the earlier mill. By 1793 John had died and his wife became the owner. Then from 1799 to 1823 the tax list has a second John Good as the owner. In 1846, Henry Von Nieda purchased the property. After a fire damaged the mill in 1850, Henry built a third mill, that still stands today. He added a sawmill in 1860. Henry Von Nieda ran the mill until he died in 1883.

The mill then passed to Henry’s son, John Adam Von Nieda who operated the mill until 1912. John added rollers to the mill in 1888. John was killed at the mill when his clothing got caught in the shaft. John’s son, Henry Franklin Von Nieda took over his father’s business and ran the mill until around 1945 when the mill closed due to lack of demand. The mill sat idle until 1967 when it was bought by Stewart Keen. Keen restored the mill to its original operating state.

The Bowmansville Roller Mill was placed on the National Register of Historic Places in 1989. Ron and Nancy Funk bought the property in 2004. Complete information including a video may be found on the Historic Preservation Trust website at the following link: https://hptrust.org/hidden-treasures-bowmansville-roller-mill/