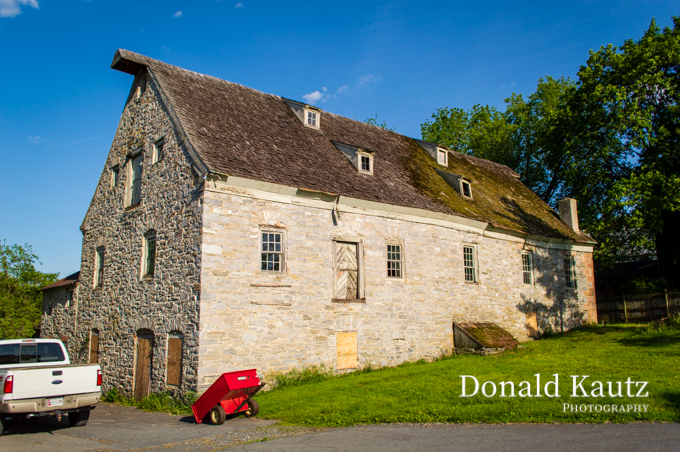 In 1757, George Klein, a member of the Moravian church, purchased a small piece of land along Carter’s Run (later called Lititz Run) on which Johann Bender’s sons had built a small sawmill. Klein converted the sawmill to a grist mill and began operations in November of 1757.

On November 25, 1775, a fire broke out at the mill. Despite attempts to extinguish the blaze, the mill and sawmill were destroyed along with 1000 pounds of recently gathered grain. The Moravian Brethren rebuilt the mill in 1776 with the help of millwright Hans Christoph Christensen. Christensen put much effort into rebuilding the mill even though he was in ill health at the time. The mill was completed in December of 1776. Hans Christensen died soon after. When the new mill was built it was laid out by the cardinal points of the compass hence the name Compass Mill.

Water from the Lititz Run was channeled to the mill through a 700-foot headrace. The mill was powered by two turbines and was able to produce 25 bushels of grain per day. A 900-foot tailrace returned the water to the creek.

The mill sat vacant until Sylvan Brandt bought the property in the early 1970s and renovated the mill and other buildings on the property. Brandt also added a 22-foot diameter internal water wheel that was powered by pumps that used public water to turn the wheel. The Compass mill was listed as a site of “outstanding significance” in Lancaster County heritage by the Lancaster County planning commission in 1972. The mill served as a home for various antiques dealers in the 1980s through 2005. In 2013, Andrew Keylor purchased the mill and was working on converting the second floor into a residence when he died unexpectedly in 2015. Andrew’s parents listed the mill for sale in 2017. In 2020, the mill and surrounding properties was owned by Compass Mill Complex, LLC, which plans to renovate the mill into offices and event space. The renovated mill is scheduled to open in 2022.

The mill is located at 817 Rothsville Road, Lititz, PA.