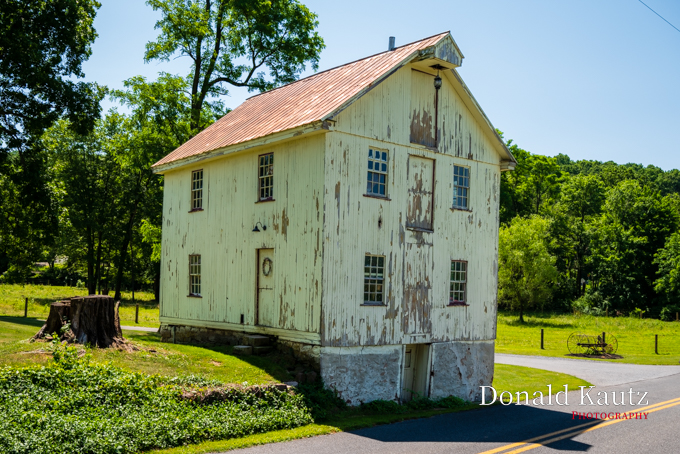 John Binkley built a stone and wood linseed oil mill on this site sometime prior to 1755. His brother, Henry Binkley, purchased it in 1775 during the American Revolution. The next owner was Samuel L. Binkley who took charge in 1822. In 1845, it was remodeled and changed to a fulling mill. In 1875 the mill was inactive. But by 1893, Samuel Binkley’s grandson Benjamin Binkley operated it as a chop mill in his grandfather’s name. The mill was an old style, exterior overshot wheel with a race and sluice.

In that year (1893), the Imperial Mill Company from Duluth was looking for an old mill to use as an exhibit at the Chicago World’s Fair. The company scouts selected Binkley’s mill to be featured at that exhibit. The company intended to purchase the mill outright and move it to Chicago, but the engineers decided that the old structure would not survive the trip. Instead, they built a duplicate using Binkley’s mill as a pattern. Benjamin Binkley was to be retained, if possible, dressed in costume as part of the exhibit.

Benjamin Binkley died in 1907. Then, in 1910, John Lengel built a new frame mill on the site. Later the mill was owned by Omar Swartz. The mill closed in 1940. At 24×30 feet, this is the smallest mill in Lancaster County. Today, the wheel and sluice are gone, and the structure is used for storage.

The mill is located at 15 Resh Road, Reinholds, PA.