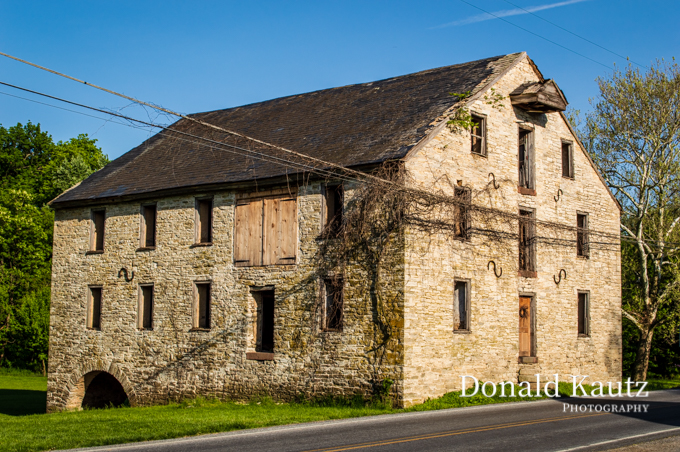 George Eby (Ebi) purchased land where the Hammer Creek joins the Cocalico c1733. Here, around 1760, he built the first grist mill on the Hammer Creek. It was most likely a log mill which he operated for many years. From 1785 to 1789 the owner was Christian Eby, Jr., and in 1792 the owner was Christian Eby. In 1797 Jacob Shaeffer took ownership. From 1806, Jacob’s widow, Barbara Shaeffer became the owner. In 1815 the owner was Barbara Schaeffer who paid taxes on a very old grist mill of wood, 42 by 27 feet. In 1821, the owners were listed as Widow and Jacob Shaeffer. In 1832, Jacob Shaeffer built the current structure, a new stone mill, 2.5 stories and 30 by 40 feet.

It was later owned by Levi H. Brubaker for several years then by Jonas Nolt in 1886. In 1899 it was owned by F. S. Brubaker and in 1902 by James S. Moore & John H. Reitz. In approximately 1906, a grain elevator belonging to Reitz, located along the railroad tracks, was damaged by a fire. This fire was erroneously reported as having been at the mill, but the mill was not near the flames. In 1908 Moore sold out to Reitz. Reitz made two large openings in the side of the mill to provide access to his trucks. L. S. Withers was the last to operate the mill. In 1920, Withers was shipping a carload of wheat almost every week by way of the Pennsylvania Railroad line that went through Millway.

In 2010 Abram Bollinger transferred ownership to Thomas and Barbara Sue Bollinger. The mill is being used for storage. The old railroad line has been made into the Ephrata to Warwick rail trail.

The mill is located at 330 Meadow Valley Road, Rothsville, PA.