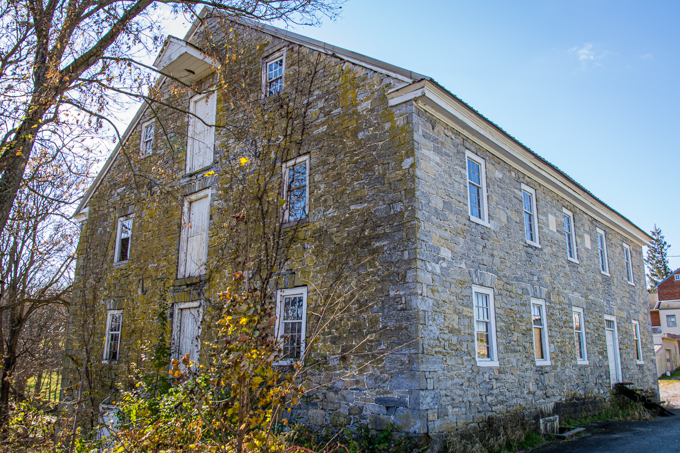 Captain John Galbraith built a grist and sawmill out of logs on the Donegal Creek in 1720. This mill was located on a heavily travelled road that ran from the fur trading posts on the Susquehanna to join with Peter’s Road in Mount Joy. Captain Galbraith died in 1753 and the mill was sold to John Bayly. Bayly operated the mill until his death in 1794. The farm and mills were then purchased by Heinrich Schaerr (aka Henry Share).

In 1804, Henry Share tore down the Galbraith/Bayly mills and built a three-story merchant mill on the south side of the road. In 1813, Share called for an “artificial road” to be built from the Anderson’s Ferry, Waterford and New-Haven turnpike road, past his mills, to intersect with the Lancaster, Elizabethtown and Middletown turnpike at Richland and Mount Joy. This road is now Anderson Ferry Road (Route 772).

Henry Share offered the plantation, including the grist mill, for sale by auction on March 7, 1822. The mill was purchased by John Stauffer who operated the mill for almost 20 years. Then, on Jan 27, 1841, Stauffer advertised the mill for sale.

The mill is located at 615 Anderson Ferry Road, Marietta, PA.