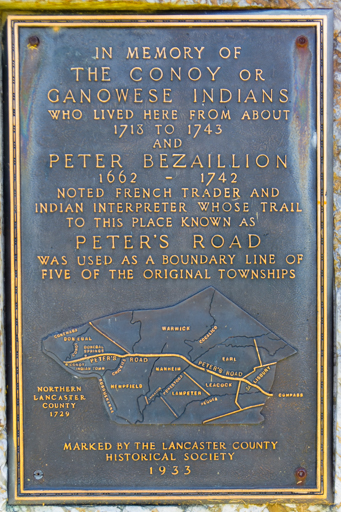 This is the third installment on the topic of the early fur traders that operated in Lancaster County. The first article introduced Jacques LeTort, who with his wife, Anne, and son, James traded on the Schuylkill and later on the Susquehanna. The second article told the story of Martin Chartier, who after many adventures, ended his career in what would become Lancaster County. This post is about another French Huguenot named Pierre (Peter) Bezaillon.

Pierre (aka Peter) Bezaillon immigrated to New France (Canada) in 1680 along with several of his brothers when he was 18 years old. In 1684, Rene-Robert Cavelier de La Salle was commissioned by Louis XIV to establish a French colony in Louisiana. He set sail in four ships to find the mouth of the Mississippi from the Gulf of Mexico. The enterprise ended in disaster. One ship was lost, another turned back to France and the remaining ships missed Louisiana completely and landed in Texas. La Salle’s bad temperament was finally too much, and he was assassinated by his own crew in March 1687. In 1686, a search party was organized to find La Salle and the French Colony. Peter Bisaillon was in the party that travelled down the Mississippi in search of LaSalle. They did not find La Salle, but Peter returned with valuable knowledge of the Mississippi valley and its inhabitants. In 1687, he partnered with two other French traders named Gedeon Petit and Pierre Salvaye Tremont, who were wanted by the French authorities for trading with the English. The partners moved their operations from Montreal to Albany to avoid prosecution by the French. As part of this company, Peter was involved in a trading mission to trade with the Indians on the upper Susquehanna. This operation ended in disaster as their boat sank and the cargo was lost.

Peter arrived in Pennsylvania somewhat down on his luck in about 1688 where he joined the trading company of Jacques Le Tort, another Huguenot refugee. Peter set up an Indian trading post on the Schuylkill River at the mouth of the French Creek about five miles below LeTort’s plantation at present-day Spring City. It was in 1692 that Martin Chartier and his band of Shawnees settled at the mouth of the Susquehanna. Jacques LeTort was in London at the time but Peter joined forces with Anne LeTort and Chartier to trade with the western Indians using the Shawnees as their contacts. The Provincial authorities became wary of him and suspected him of treachery. On December 19, 1693, Peter and his brother Richard, along with Anne LeTort and a man called Captain John Dubois, were accused of espionage and carrying on secret correspondence between the Shawnees and the French of Canada.

When Jacques LeTort returned in February of 1684, they met with the Governor and were cleared of all charges for the time being. By the late 1600s, there was a glut of furs going into Quebec causing prices to drop. Chartier, Le Tort, and Bisaillon then ran a smuggling operation bringing furs from Detroit through Albany into Pennsylvania where they could sell them to the English for a higher price.

In 1701, his case was again brought before William Penn and the Provincial Council where he was suspected of being “a very dangerous person in his traffic with the Indians in this troublesome conjuncture of affairs.” In 1702, Peter’s former boss, Robert Quary, accused him of being a spy sent from Quebec to enable a French settlement in Pennsylvania. The council resolved that Bezaillion be restrained from trading or living with the Indians. In 1703 he paid a 500-pound bond as security to guarantee his loyalty and was admonished to “behave himself as a good and loyal subject of Queen Anne.” In 1704, in an apparent attempt to prove his loyalty, Peter travelled to Philadelphia to report that a party from the Five Nations was planning to come down and carry off the Shawnee Indians who were their enemies. When Governor John Evans visited Pequea on June 30, 1707 to meet with the Shawnese King Opessah, Peter served as the interpreter.

In June of 1708, James Logan wrote a letter to the council on Peter’s behalf stating that he is “useful and accounted very honest by those who trade with him.” In October of that year, Logan granted Bisaillon permission to build a house and plant fields for his use on the lands above Conestoga. However, in 1709, Logan was forced to flee to England after the Pennsylvania Assembly called for his arrest. Without Logan’s protection, suspicions arose again and in 1710, the Governor referred to Bisaillon as a “suspicious person generally who trades with the Conestoga Indians.” Bisaillon was imprisoned for about eighteen months until he was released on bail.  It was a about this time that Peter married Martha Combe, the daughter of John Combe from Philadelphia, a young woman who was about thirty years younger than him. In 1712, after the return of James Logan, the Governor licensed him to trade with the Indians and told the Indians that he was the only trader allowed to settle among them. In 1714, he was granted a warrant to “seat himself at Paxtang, or at any other Indian town or place on the Susquehanna, in this Province, and to erect such buildings as are necessary for his trade.” Bisaillon, Chartier, and Ann LeTort, became key players in Logan’s trading operations. In 1719, he obtained a warrant for 700 acres of land located along the Susquehanna River above present-day Marietta. This land was granted for the use of his wife, Martha.

“Peter’s Road”, the path the Peter Bezaillion followed on his trading trips between Philadelphia and Paxtang, followed an old Indian path that let westward from Philadelphia to Tom Moore’s mill in Chester County (now Downingtown). From there it followed a path later to become part of the King’s Highway, Philadelphia Pike (Rt. 340) to a point in Lancaster County, just beyond the village of White Horse, where it branched to the right. This section is still called “Peters Road” today.  It crosses the New Holland Pike at Groffdale. Then it followed the Upper Leacock Township line and forded the Conestoga just below the conjunction with the Cocalico Creek. From there it followed the Northern boundary of Manheim Township. Then to the boundary of Penn and East Hempfield townships, into what is now Mount Joy. There, there was a fork. One branch of the fork followed Donegal Springs Road past the old Donegal Church to Conoy creek and on down to Conoy Town (south of Bainbridge). From Conoy Town, the road heading north to just below the Conewago Falls where there was a ford across the Susquehanna. Another branch lead on up through Falmouth and Middletown to Paxtang (Harrisburg). The other branch from Mount Joy, followed the route of present-day Rt. 230 through Elizabethtown and Middletown to Harrisburg.

Peter and his brother, Richard, had their headquarters and trading post among the Paxtang Indians in 1721. Peter served as an interpreter on several occasions, once at a conference with the Delawares at Conestoga in 1717 and again at an Indian Conference in Philadelphia in 1728. In 1729, Peter and his wife, Martha, settled on a farm in Cain township, Chester County in the area now known as Coatesville. He died on July 18, 1742, at the age of 80. He is buried in cemetery at St. John’s English Church at the “Sign of the Compass“, on the old Lancaster Road.

One thought on “Peter Bezaillon”