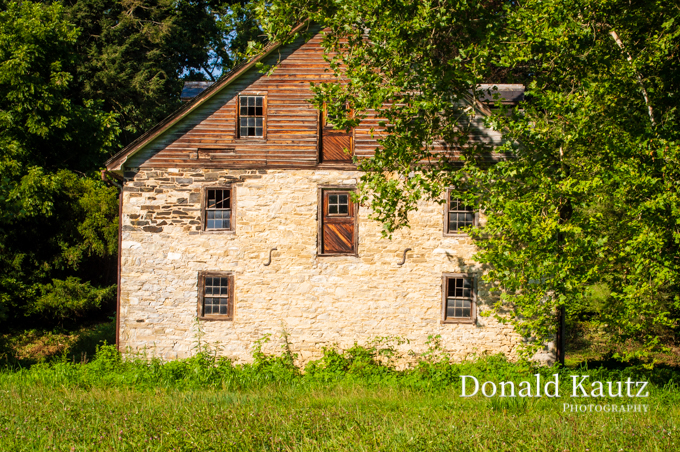 The first mill at this site was a log mill built in 1774 by Jacob Smith. It was a three-story corn and sawmill. The records of Old Conestoga show a Jacob Smith owning a mill from 1789 to 1802. Jacob Smith replaced the 1774 log mill with a new stone mill around 1806. In 1836 the mill was sold to Abraham Mylin, and he either built a new mill or enlarged the older mill which then increased the mill to a 40×60 feet, 3.5 story stone/frame mill. Mylin rebuilt the mill after a fire in 1853 in which 3000 bushels of wheat were destroyed. In 1857, Mylin sold the mill to Benjamin Harnish. It was resold in 1868 to John B. Good, in 1870 to Thomas Baumgardner.

The following paragraph is from an article in the Lancaster New Era dated December 17, 1881:

Mr. Thomas Baumgardner, of Lancaster, owner of Baumbardner’s mill, on the Pequea, had lately introduced into the mill two large turbines, to take the place of the smaller and more imperfect ones heartofore in use. The work of placing them in position was entrusted to Mr. David Kratz, of Ephrata, and it is unnecessary to add was carefully and skillfully performed. The above mill has an excellent waterpower, is furnished with every modern appliance, and has a capacity of, perhaps, fifty barrels of flour per day. Under the excellent management of its foreman, Mr. Samuel Young, it has secured a large patronage, and is considered one of the finest manufactories of its class in the county.

In 1899 ownership transferred to J. H. Baumgardner. Then the mill changed hands several times from Baumgardner to Jacob Herr, Henry Hess, and then to Edwin Diffenbaugh. In 1906 the owner of the Burnt mill raised the height of his dam to a level that caused the water to back up to Baumgardner’s mill which lessened the amount of hydrostatic pressure available to power the turbines. This led to a feud between the two mills that ended in law suits and charges of murder.

Ownership of the mill was returned to Henry Hess again in 1913. It then passed to Abram H. Hess, Enos Hamish, Sumner Brown, Clayton Hilton, who traded the mill to H. Frank Eshleman for a farm.

The mill is located at 98 Byerland Church Road, Pequea, PA next to Baumgardner’s Covered Bridge.