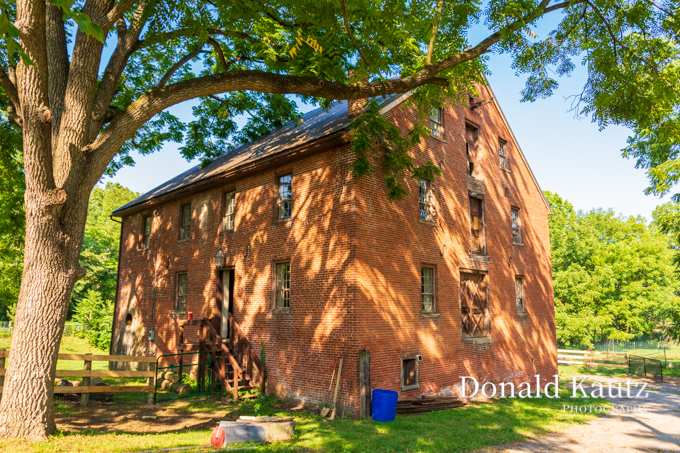 The land on which the mill was built was first settled in 1720 by David Byers. He squatted the land at first but eventually acquired ownership from the Penns. Abraham Stouffer bought the property in 1773. Stouffer built the first mill, a three-story brick one, c1775 and owned it until 1783 when he sold to Jacob Kreybill. Kreybill built the mansion house in 1790. Jacob ran the mill until he died in 1810 and then it passed to his son, Jacob, Jr. who ran the mill from 1810 to 1832. In 1815 the mill was 40 by 36 feet and of two stories. In 1830, Jacob & Elizabeth Kreybill built a new brick mill. Jacob, Jr. died in 1832 leaving the mill to his infant son, Jacob E. Kreybill. From 1832 to 1850 the mill was operated by the executors Jacob and Peter Nissley. In 1850 Jacob E. Kreybill assumed control of the mill from the executors and operated the mill until 1870.

In 1870 the mill left the Kreybill family when it was sold to Isaac Breneman. In 1872 the mill was sold to Jacob Musser, in 1878 to Christian H. Nissley, and in 1880 to Levi Nissley. At this time the mill, now called the “Marietta Mill”, was powered by both water and steam.  Finally in 1925 it was purchased by Wolgelmuth and Strickler. The mill ceased operation in that year. In the 1950s, the road was realigned to run behind the mill, obliterating the head race.

The restaurant closed in 1995 but the plantation remained open for tours until at least 2001 when Joanne Zink became ill and could not continue the business. Then it sat vacant for several years. The plantation was offered at auction on May 15, 2010. Joanne’s son, Franklin B. Zink, Jr. ended up with the property. Franklin sold the property to Eli Fisher in 2017.

Today, the mill is in fair condition and the mansion house appears to be in good condition.