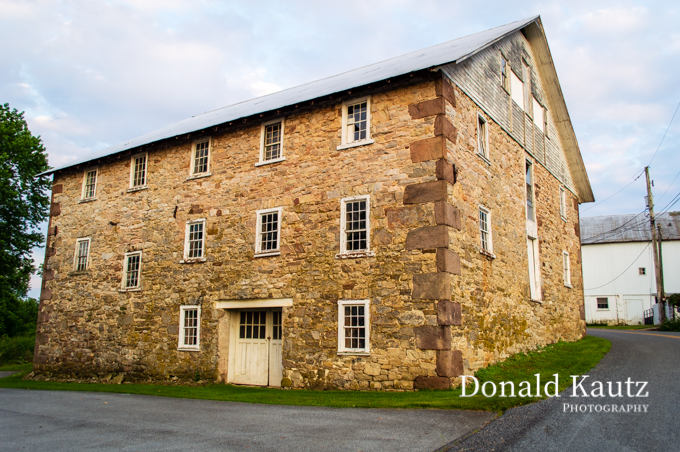 In 1784 John and Joseph Weaver, sons of Hans Weber (Weaver), built a 4 story stone grist mill 40 by 60 feet on the Cedar Run near Goodville, bringing the water through a long head-race from a dam built on a part of their fathers farm, and thereby made a head or fall of 27 feet for their mill. Water was collected in an iron tank. An iron trough, two and one-half feet wide and high let the water to the top of the overshot wheel. The wheel was located inside the building and was 24 feet in diameter, the largest wheel ever used in eastern Lancaster County.

This mill descended from the original owners, through Abraham Weaver, Christian Rutt, Jacob Frantz, Sam Eby, Henry W. Hess, Daniel Groff, David Martin, Aaron W. Martin, and finally, Aaron H. Weaver. There was a fire in 1894 and the mill had been rebuilt by 1898. The mill was last operated by Aaron Weaver, and he closed the mill in 1931 after another fire. After the fire, the mill was purchased by Jonathan Martin who converted the mill into a chicken house. Today it is used for storage and is in good condition.

The mill’s water source was a 15-foot-high dam on the Cedar Run that fed into a 1,300-foot headrace. The mill was powered by an overshot wheel and could produce 24 barrels of grain per day. The water returned to the creek in a 900-foot tailrace.

The mill is located at 117 Frogtown Road, East Earl, PA.