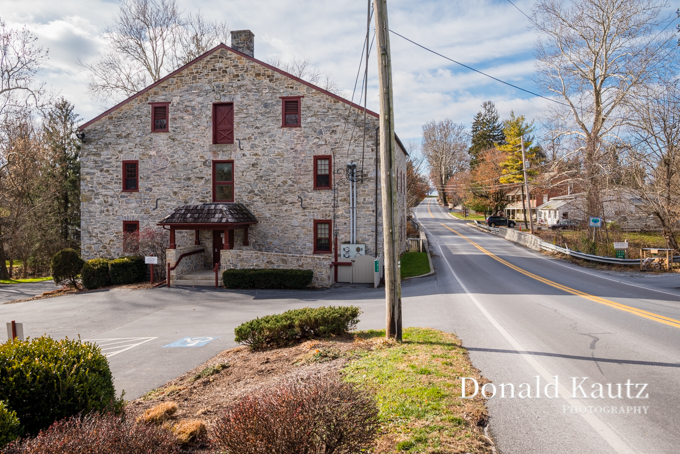 Jacob Bear (Bare) built a mill on Carter’s run (now Lititz run) as early as 1717. His son, Samuel Bear, succeeded him in ownership of the mill. Samuel built a tavern in 1735. This tavern still exists as the Reflections Restaurant. Samuel Bear sold the mill to Martin Myer in 1767 but continued in the tavern business throughout the Revolutionary War. The tavern was a popular stagecoach stop. Myer named the community around the mill “Catfish” because of the productive fishing spot behind the mill.

Five generations of Bears operated the tavern at Catfish and the mill continued to be known as “Bear’s Mill” even though it was owned by Myer. Myer sold the mill to Jacob Staman in 1810, who soon afterwards replaced it with a current structure in 1814. In 1824 it was sold by the sheriff to the Pennsylvania Bank, then it was Benjamin Landis in 1829. The village of Catfish was renamed “Oregon” in 1846.

Then, in 1950, Jerome and Anna Lois Mellon bought the property from Imperial Asphalt. Their plan was to use the property to build prefabricated housing. The township denied that request also, setting up another appeal to the Pennsylvania supreme court in September of 1951. It’s not clear what happened next, but the manufacturing plant was never built. The Mellon’s transferred ownership of the mill property to their daughter, Mary Arlene Rose and her husband Thomas W. Rose. In July of 1955, the mill was seized by the county. Elmer L. Zook was a tenant. The Roses deeded the mill to Elmer L. and Jacob L. Zook in August of 1955.

It was listed on the National Register of Historic Places in 1985. In 1986, Lynn Patterson opened RE/MAX by the Stream in the mill with room for 29 agents. Finally, in 1989, the Church of the Brethren purchased the mill and opened COBYS Family Services.