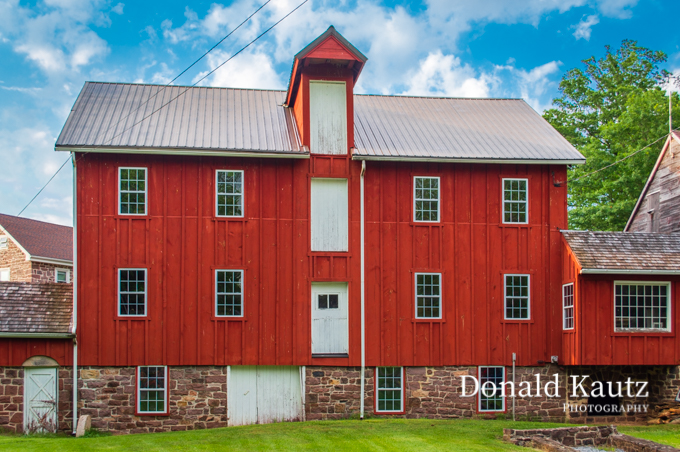 The first mill on this site was built before 1772 by Dr. Samuel Martin. It was a stone / frame mill of 2.5 stories. Samuel Martin was the owner until at least 1824. Joseph Overholtzer owned the mill as early as 1852. The mill became known as “Overholtzer’s Mill” and that name seems to have stuck even as others assumed ownership. A covered bridge over the Muddy Creek was built in 1866.

Samuel Sensenig was the owner in 1875. The first mill was replaced in 1894 by Menno Eberly. That mill burned down in the same year but was immediately replaced with the current structure.

William Zimmerman owned the mill from 1923 to 1933 and passed it on to Levi Zimmerman in 1933. Levi operated the mill for about 15 years ceasing operations in about 1948. Then the mill stood idle for another ten years.

Leroy Sensenig purchased the property in 1959 and restored the mill as a tourist attraction. In 1961, the covered bridge was bypassed by a new bridge. By 1962, the mill was using an overshot wheel to grind corn meal and whole wheat flour. Sensenig opened a campground around the lake that fed the mill. The Senenig’s operated “Red Run Grist Mill Camp Site and Picnic Grounds” until about 1979 when Mark and Irene Roth took over the camping operation. In 1998, Levi Zimmerman’s son, Caleb, bought his father’s mill back from Leroy Sensenig.