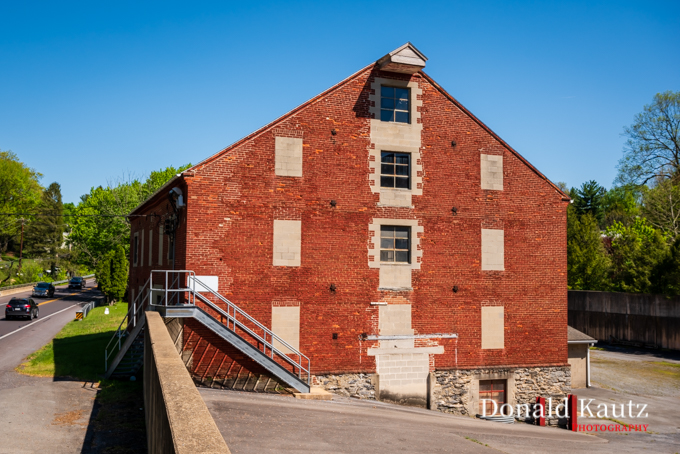 The first mill on this site was built by Rudolf Herr, who was a nephew of Hans Herr. The mill would have been built sometime prior to 1759. The first mill was a 2.5-story, stone mill that measured 30 x 30 feet. In 1770, Rudolph gave the mill, along with 488 acres of land, to his son Rudolph (Rudy). At this time, the mill was used as an oil mill (that is, linseed oil). Rudy Herr sold the mill to Benjamin Kauffman in 1812. Kauffman sold the mill to Jonas Eby in 1821. Sometime after that, ownership transferred to Martin Harnish who offered the mill for sale in 1844.

Israel Nestleroth purchased the mill seat in 1852 and built the current mill in 1853 (The date stone says Israel and Eliza Nestleroth). It was purchased by Jacob N.  Metzler in 1857 who owned it for a few years until it was next purchased by George Levan who had previously been the miller at Wabank. George Levan took possession of the mill, now called “Willow Grove”, in the spring of 1863.  He improved the mill and doubled its capacity. In 1866, the oldest son, Samuel L. Levan was taken into partnership and the firm became “George Levan and Son.” The firm continued at Willow Grove until April 1, 1868, when they sold the property and moved to Lancaster. In 1870, George Levan, Samuel Levan, and David K. Wolf purchased the waterpower at Lock #1 of the Conestoga Navigation and went on to build the Levan and Sons flour mill on the big Conestoga.

In 1870, the mill on the Little Conestoga became John Brenner’s “Willow Grove Mill”. It remained in the Brenner family for almost thirty years. During this time a small community formed around the mill that was known locally as “Brenner’s Mill”. The last Brenner to operate the mill was Levi Brenner, the son of John and Mary Brenner. Levi in his later years, was the superintendent of the Greenwood cemetery. John Brenner died in 1895 and Levi died in 1904.

B. Eschbach bought the mill around 1897 although the community was still commonly called by the former name of Brenner’s Mill. Harry H. Eschbach closed the mill in the early to mid 1900s.

Recently it has been used as a fertilizer plant called the Margro Company. The exterior has been modified with unpainted cement blocks filling the window openings, and complete alterations in the interior. However, the building is in good condition. The mill is located at 1020 Millersville Road, Lancaster.