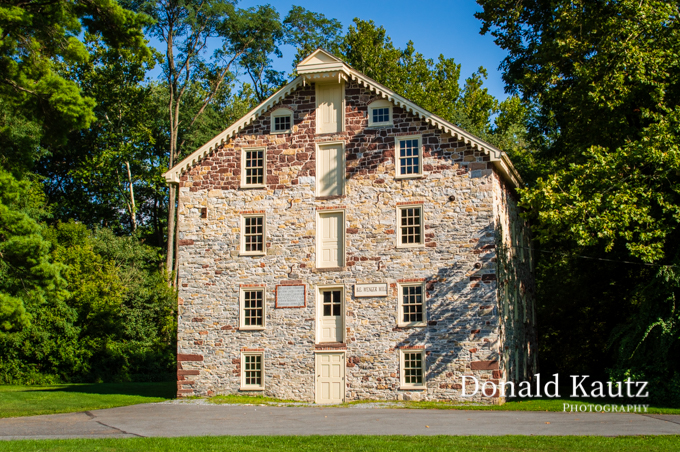 The first mill on this lower location along the Cocalico creek was built by Andreas Kropf sometime after 1736 when 175 acres were patented to him from the Penn family. The Cloister Brotherhood purchased the mill in 1741. This group expanded the grist mill into a grouping of connected mills that shared a common power source. In addition to the grist mill there was a sawmill, a paper mill, a flaxseed oil mill, and a barley mill all under one roof. The mills were operated by the Cloister throughout the middle 18th century.

The Cloister community broke up in 1814 and its remaining members reorganized as the German Seventh Day Baptists of Ephrata. The ownership for both Ephrata mills was transferred to this group. The Lower Mill was refurbished in 1814 and the dam rebuilt. The mill was leased to Jacob Konigmacher who operated it until 1827. The mill was remodeled again more extensively in 1828 after which it was leased to Benedict Bucher. Benedict Bucher continued to lease the mill from the society until he purchased his own mill near Reamstown in 1853. Then, in 1859, the mill property was listed for public auction. Samuel Royer submitted the winning bid.

The mill was deeded to Samuel K. Royer on March 30, 1860. Royer was a trustee of the Seventh Day Baptists. Samuel died in 1864 and ownership of the mill transferred to his widow, Catherine, and to his son, Phares W. Royer and his daughter, Harriet (Royer) Dohner. They, in turn, sold the mill to John Messner and Jacob Zeiley in 1868. Included in the terms was a widow’s dower that would pay interest to Catherine Royer for as long as she lived.

After Walter Moyer’s death, the Walter W. Moyer Company used the lower mill for storage for about twenty-five years. In 1973, they deeded the mill property to June Haller and the properties were once again held in joint ownership. Finally, the Ephrata Borough re-acquired the mill property and Metzler farm in 1993 with the understanding that the property would remain private for Mrs. Haller’s lifetime after which it would become a public park. The mill building is maintained through funds from a non-profit organized in the year 2000 as the Wenger Grist Mill Foundation.