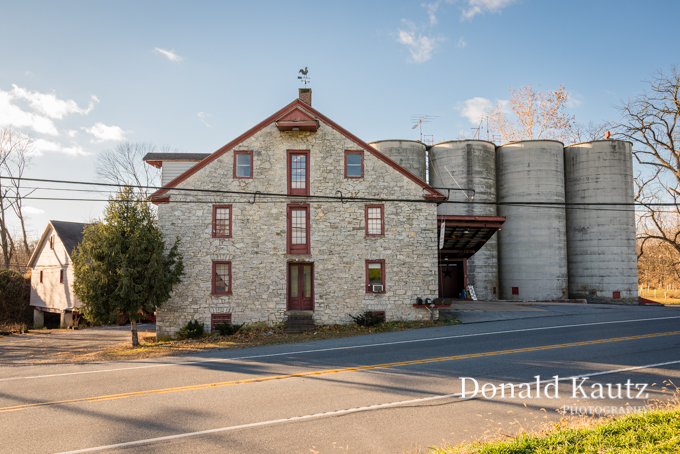 Jacob and Magdalena Kaufman built a stone mill along the Little Conestoga Creek on a lot purchased from the Penn family in about 1760. The early mill was replaced by the current, slightly larger one in 1800. Jacob operated the mill until his death in 1822 and then it passed to his son Jacob. Jacob Kaufman was the owner from 1822 to 1835, and Anna Kaufman from 1837 until 1885. In 1885, the Kaufman family sold the mill to John S. Gingrich.

The Conestoga Milling Company purchased the mill and continued the milling operations in 1916. The Conestoga Milling Company went bankrupt and closed in 1924. Jacob Flory purchased the mill at auction in 1929. Flory moved an old barn to the site and reconstructed it next to the mill. The barn provided storage for the mill products and served as a loading station for an adjacent rail line. Jacob and his brother Paul operated the mill as a partnership called Flory Brothers. Jacob died in 1962 and his son, Daniel Flory replaced him in the partnership. Daniel resigned from the partnership in 1972 and Paul’s son, Tom Flory, entered the partnership. Tom Flory became the sole proprietor when his father retired in 1973.

Operations continued until the mill was severely damaged by a fire on October 9, 1984. The mill was restored in 1985 and has been used since then for offices and shops. In 2021, the mill was serving as commercial offices.