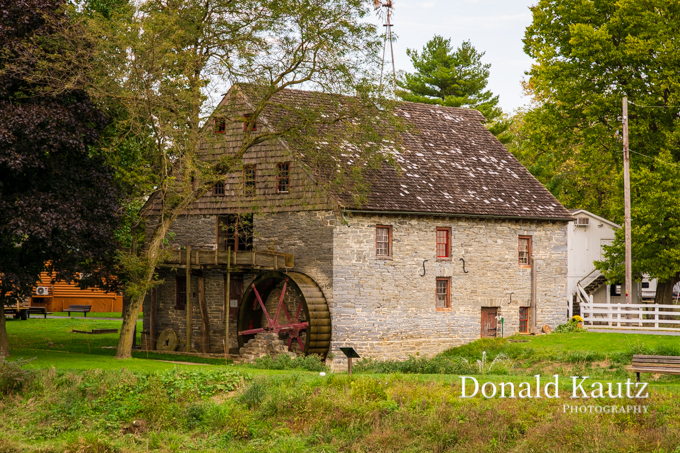 John Herr, son of Christian Herr and grandson of Hans Herr, purchased 1100 acres from Herman Richman in 1730 and in 1740, built a three-story grist and sawmill on the Pequea Creek. The mill property passed to his son, John Herr and then to his son, Squire John Herr. Squire John Herr replaced the first mill with the current stone mill in 1803. This mill was powered by two turbines and had a capacity of 25 bushels per day.

Benjamin B. Herr assumed ownership in 1864. Then, in 1899 ownership transferred to Benjamin’s nephew A. Lincoln Lefever in 1899. Lincoln’s widow took over the business after her husband’s death. The mill was last operated by Lewis Snyder and closed in 1924.

In 1957, the mill was purchased by Donald Denlinger who renovated the mill. The property was sold to Barbara and James Vitale in 1978. The mill is part of the Mill Bridge Village Camp Resort and is open for guided tours. Today, the mill sports an external overshot wheel but that is not authentic. The covered bridge was removed in 2020 and is now located at Stone Gables Estate near Elizabethtown.