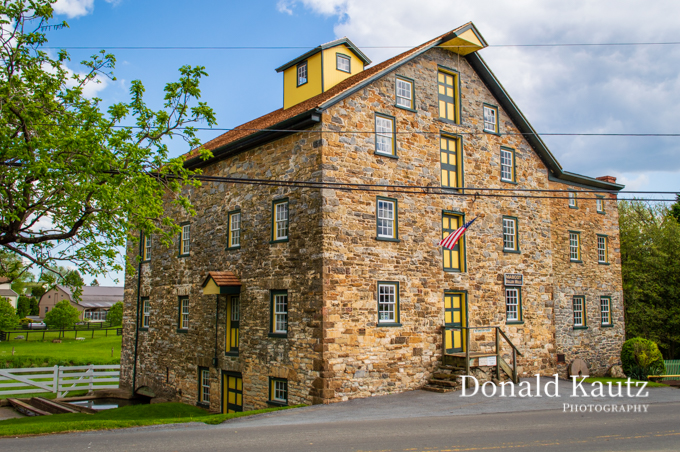 The first mill at this location on the Mill Creek was built by Jacob Bare (Bear) sometime between 1738 and 1740 on property that he bought from a Quaker named John Piggot. Jacob and his wife Barbara deeded the mill tract to their son-in-law, John Leonberger in June of 1740. John and Barbara Leonberger sold the mill to Samuel Jackson in 1745 when the Leonbergers moved to Virginia. Unfortunately, Jackson died a few years later leaving the mill to his widow Ann with substantial debts. Ann tried to dispose of the mill property but could not find a suitable buyer. In 1751, Ann’s son Caleb Jackson was able to purchase the mill and surrounding property for 1,100 pounds. Caleb Jackson divided up the property, separating the mill and outbuildings from the rest of the tract. He then sold the mill portion to Moses Brinton. The mill changed hands every few years until it ended up in the hands of Jacob Becker in 1779. Jacob Becker died in 1783 and ownership passed to his widow.

As soon as Jacob Becker’s son Daniel came of age, he settled his father’s affairs and sold the mill to Benjamin Longenecker in 1799. Benjamin’s son Peter Longenecker assumed ownership in 1813 but only held it for two years until he sold it to Marks Groff. Marks and his wife Elizabeth built a large stone house across the Stumptown Road from the mill. The Groffs ran into financial troubles and the mill was sold at auction on January 20, 1820. Marks Groff’s brother-in-law, Daniel Groff gave the winning bid and became the next owner of the mill.

Daniel and Magdalena Groff managed the property for forty years and made numerous improvements. They raised the height of the mill to the present 3.5 stories and added a frame sawmill. They built a large, brick general store and residence on the northwest corner of Stumptown and Newport roads. A post office was opened in the store and the community was known as “Groff’s Store”.

William Ressler purchased the mill in 1865. In 1882, ownership passed to William’s son, Jacob K. Ressler. Jacob successfully petitioned the Postmaster General to open a post office at the mill. This provided his neighbors the convenience of picking up their mail at the mill. But they needed a name for the post office, and it could not end in “town” or “burg”. It was Jacob’s wife Annie who suggested that they call the mill and the village around it, “Mascot” after a little dog that she had seen in a Broadway show on their honeymoon.

Waterpower for the Mascot mill comes from the Mill Stream. A twelve-foot-high dam funnels water into a 300-foot-long headrace. The original mill utilized overshot wheels for power, but they were replaced by turbines in 1906 and the mill stones were replaced by rollers. The water returns to the Mill Stream by way of a 1,300-foot tailrace.

Jacob and Annie had eight children. Unfortunately, three of them died early, two of them due to illness and the third, Oram, died in an accident at the mill in 1904. Three other children pursued occupations away from home, but W. Franklin Ressler and his sister Anna remained at Mascot the rest of their lives. Franklin served with the Army Air Force in the Pacific during World War II but returned to operate the mill even as demand for its services decreased.

The mill is located at 2900 Stumptown Road, Leola, PA.