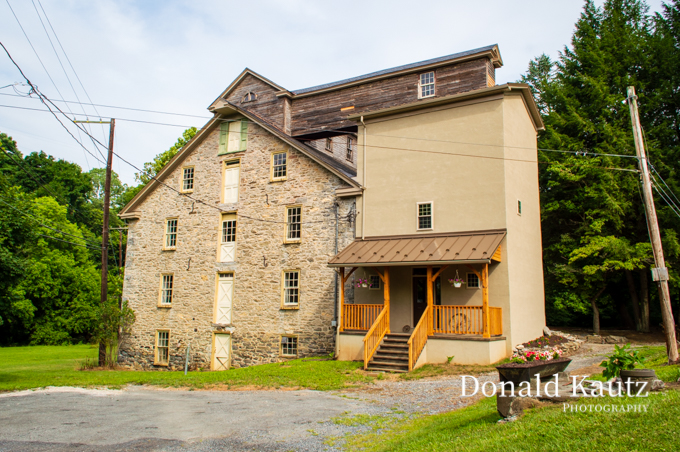 Welcome to another edition of Mill Monday! Each week I feature one of Lancaster County, Pennsylvania’s remaining water-powered grist mills. This week features the Lake Mill in Manor township, so called because of the large pond that provided water for the mill.

There is a gap in the history between 1929 and the 1950s when it was a flour and feed mill run by Miller and Bushong of Rohrerstown. It was vacant in 1958 when Guy and Sally Starry purchased the property. The Starrys opened the Country Mill Restaurant in 1964. The restaurant was known as a high-end restaurant serving French fare. The Starry’s daughter, Anita, and her husband Henry Emrich, took over management of the restaurant sometime during the 60s. The lower-level dining area and wine cellar were flooded during Hurricane Agnes in 1972. Guy Starry died in 1978. In 1985, brothers Bob and Mark Green opened a new formal restaurant called “Country Mill 1770” in the upper part of the mill. In the following year they opened an informal restaurant called “The Millrace” in the lower part of the mill. It appears that both restaurants closed again in 1986 because there are no mentions of the restaurants after that date.

More information about this mill can be found on this website at: Lake Mill