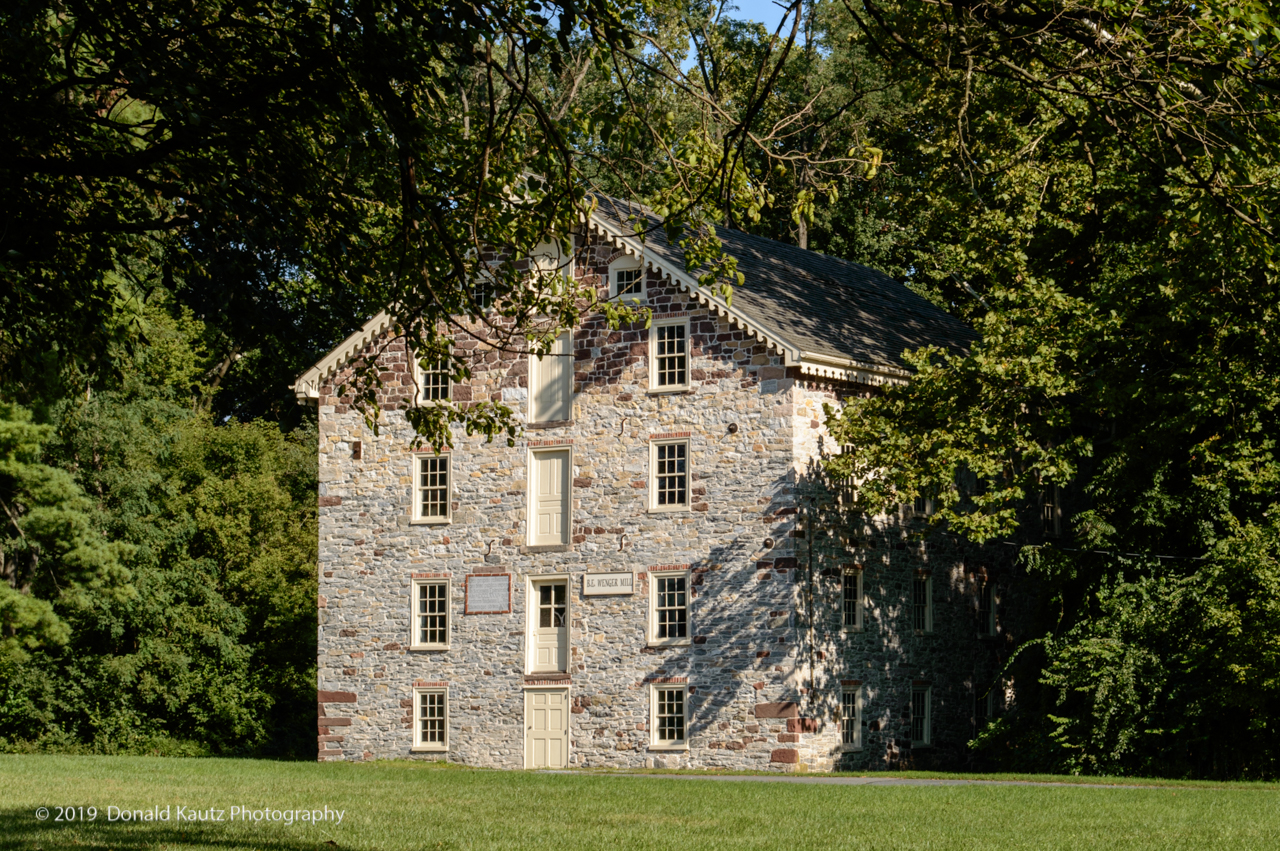 It’s Monday morning! As I mentioned last week, today is the last installment of my Mill Monday series. I haven’t covered all the mills that are still standing in Lancaster County, and I apologize if I didn’t feature your favorite mill. But all good things must come to an end. I hope to be able to publish my mill information in book form sometime soon. Until then, I will keep my website up to date with the photos and information as I discover them. Today I will be featuring the Ephrata Cloister Lower mill also known as Wenger’s Mill.

The first mill on this lower location along the Cocalico creek was built by Andreas Kropf sometime after 1736 when 175 acres were patented to him from the Penn family. English clerks had trouble spelling German names and did so inconsistently. Kropf’s name also appears as Stroop, Strobff, Scroop, Krub, or Grubb. Andreas Kropf immigrated to the colonies in 1729 along with a group of Pietists led by Brethren church leader Alexander Mack. He later sold his property in Ephrata and moved to Goochland County, Virginia.

The Cloister Brotherhood purchased the mill in 1741. There were at that time a group of members who, unlike their celibate brothers and sisters, were married, land-holding members. This group expanded the grist mill into a grouping of connected mills that shared a common power source. In addition to the grist mill there was a sawmill, a paper mill, a flaxseed oil mill, and a barley mill all under one roof. The mills were quite profitable until 1747 when Conrad Beisel, the Cloister’s founder, expelled that group of members. Shortly after their expulsion, the mills were destroyed by a fire. Only the saw and paper mills were saved. The burned mills were soon rebuilt, however, and were operated by the Cloister throughout the middle 18th century.

The Cloister community broke up in 1814 and its remaining members reorganized as the German Seventh Day Baptists of Ephrata. The ownership for both Ephrata mills was transferred to this group. The Upper Mill was leased for a time and eventually sold in 1828. It then operated as a grist and sawmill until being demolished in 1868. It was replaced with a larger brick building that became known as the Walter W. Moyer Knitting Mill.

The Lower Mill was refurbished in 1814 and the dam rebuilt. The mill was leased to Jacob Konigmacher who operated it until 1827. The mill was remodeled again more extensively in 1828 after which it was leased to Benedict Bucher. The Seventh Day Baptist society listed the mill for sale in 1842 but there were apparently no bidders. Benedict Bucher continued to lease the mill from the society until he purchased his own mill near Reamstown in 1853. Then, in 1859, the mill property was again listed for public auction. Samuel Royer submitted the winning bid.

The mill was deeded to Samuel K. Royer on March 30, 1860. Royer was also a trustee of the Seventh Day Baptists. Samuel died in 1864 and ownership of the mill transferred to his widow, Catherine, and to his son, Phares W. Royer and his daughter, Harriet (Royer) Dohner. They, in turn, sold the mill to John Messner and Jacob Zeiley in 1868. Included in the terms was a widow’s dower that would pay interest to Catherine Royer for as long as she lived.

In about 1940, Walter Moyer deeded the Lower Mill property to the Borough of Ephrata for the price of one dollar. The deed came with the stipulation that the Borough would build a dam across the Cocalico Creek north of Route 322, to provide waterpower to the knitting mill. However, the Second World War intervened, and the dam was never built. The borough rented the mill building for storage. After the war, Moyer ceased to use waterpower for his mill and filled in the mill race to the knitting mill.

After Moyer’s death, the Walter W. Moyer Company requested that the Borough return the Lower Mill property. The Borough granted this request in 1948. The company used the lower mill for storage for about twenty-five years. In 1973, they deeded the mill property to June Haller and the properties were once again held in joint ownership. Finally, the Ephrata Borough re-acquired the mill property and Metzler farm in 1993 with the understanding that the property would remain private for Mrs. Haller’s lifetime after which it would become a public park. The mill building is maintained through funds from a non-profit organized in the year 2000 as the Wenger Grist Mill Foundation.

Most of the information for this mill came from “A Brief History of the Ephrata Cloister Lower Mill” by Cynthia Marquet published in the Journal of The Historical Society of the Cocalico Valley, volume XXVII, 2002.

Information and photographs of this mill may be found on this website at https://donaldkautz.com/mills/cloister-lower-mill-2/.

Well, that’s a wrap. Thank you everyone for all the likes and kind words on Facebook about these posts. I will post notifications in this space about the mill book as information becomes available.