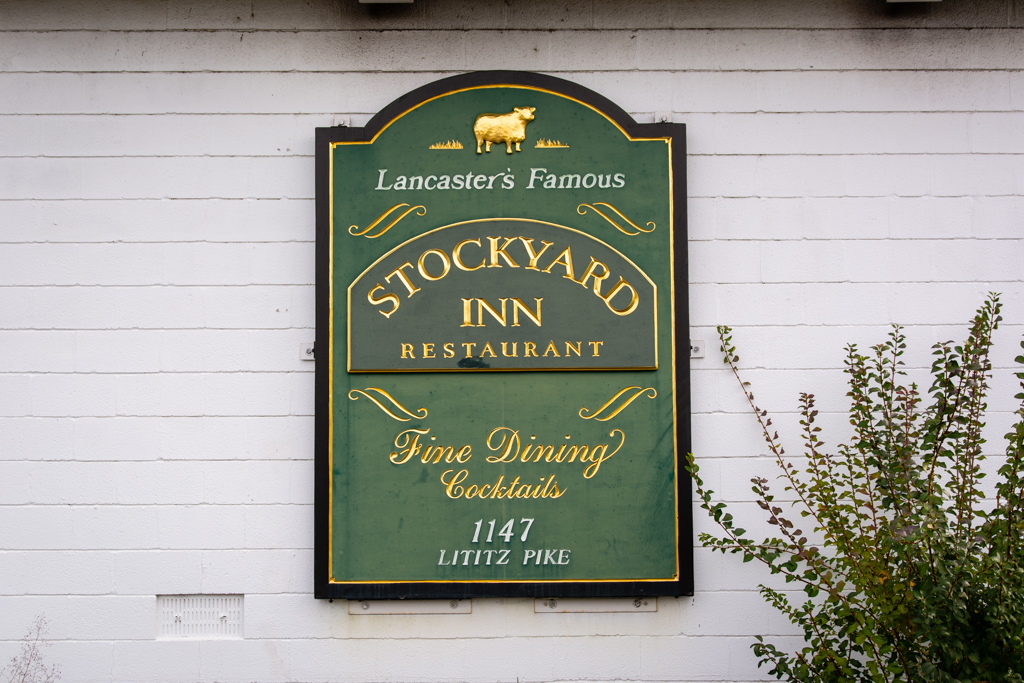 I recently had the opportunity to walk around inside the former Stockyards Inn and photograph its interior. The building has a rich history and is going through another transition now that the popular restaurant has closed, and new investors are making plans for its future.

The original house was a four-room farmhouse built in the mid-18th century. Later additions were added to the property and the estate became the country residence of the Indian Agent, Colonel Samuel C. Stambaugh. Stambaugh named the estate “Annadale”.  The Annadale estate was sold at sheriff’s sale in 1854. The property was bought by Andrew Kauffman who turned over the deed to James Buchanan in 1856 with the provision that the Colonel and his wife could live in the house for as long as they needed. Colonel Stambaugh died in 1863 but his widow remained on the estate.

On May 10, 1864, James Buchanan offered the property called Annadale for sale. His ad in the Lancaster Intelligencer reads: “A Desirable Country Residence for Sale. – On THURSDAY,  the 26th of May, 1864, I will sell by public vendue, … the property known as “Annadale”, situated on the Lancaster and Litiz Turnpike Road, in Manheim Township, near the boundary of said city, one mile from the Court House, adjoining lands of Adam S. Keller, Henry Freed, Miss Catharine Yeates and others, containing 31 ACRES and 31 PERCHES of first-rate Limestone land, with a large and commodious DWELLING HOUSE, a brick Tenant House, Barn and all other necessary out buildings thereon; a spring of running water near the house and a well of excellent water with a pump. The dwelling house in its arrangements and conveniences as to comfort, with a lawn of shade and ornamental trees and shrubbery surrounding it, is not surpassed by any in the country, and the location of the premises is the most eligible and convenient in the vicinity of the city.”

The property was purchased by Henry Hambright of St. Louis for $10,000. Hambright died in 1872 and the property was again offered for sale. The terms provided that interest on half of the proceeds were to be paid to Anna Stambaugh during her lifetime. The Annadale mansion, was offered for rent on April 3, 1879. We can presume that Mrs. Stambaugh had passed away by that time.

The Annadale homestead was bought by the Pennsylvania Railroad in 1884 when the cut-off was constructed that moved the rail lines from their location at the station on Chestnut Street to their current alignment north of the city. The Lancaster Stockyards were founded in 1895, and the house was converted into offices for the stockyards. The Lancaster Stockyards in its heyday was the largest stockyards east of Chicago. Five years later, the offices were moved and the house was made into a tavern and hotel to serve the cattlemen who came there to sell their cattle and ship them on the railroad.

In 1942, George W. Adams, president of the Union Stockyards purchased the hotel. The hotel, previously called the “Stockyards Hotel” was renamed “Stockyards Inn”. Then, in 1950, Jack Angelos, a chef from Reading bought the restaurant from the Union Stockyards and ran it for a few years until James Fournaris bought the Stockyard Inn in 1952 and the upscale restaurant soon became one of Lancaster’s premier dining venues. The Lancaster Stockyards closed in 1999, but the restaurant, managed by James’ son Tom and his wife, Athena, continued to serve its loyal customers.

In May of 2021, the Stockyard Inn was sold to a new investor. Ben Lesher, president and founder of SDL Devco LLC, which is also involved in developing “Stadium Row” on Prince Street has become the new owner. Lesher’s plans for the old Inn do not include a restaurant, so after nearly seventy years, the Stockyard Inn has closed. The plans are to move the oldest part of the Inn closer to Marshall Avenue where it will serve as a recreational clubhouse for tenants of the new apartments that will be constructed on the site.