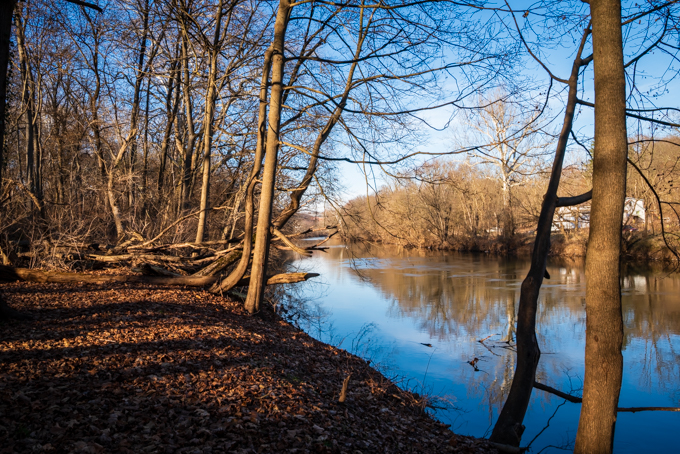 Yesterday, December 28, I walked the length of the Conestoga Greenway Trail with my son who is an avid birder. Thanks to his good hearing and eyesight, and a little help from the Merlin Bird ID app, we were able to identify the many species of birds along the trail in December.

We entered the trail from the Duke Street parking lot. It wasn’t long until we spotted some activity in the bushes to our left. There we spotted a group of Carolina Wrens flitting among the branches. Overhead, two Black Vultures wheeled in the sky and a Red-tailed Hawk flew just above the treetops looking for an unsuspecting rabbit or squirrel. A large group (or should I say, Murder) of American Crows were making a racket in the trees across the river. According to the Merlin app, there were a few Fish Crows mixed in with the group.

Further down the trail, a few Tufted Titmice (Titmouses?) scurried among the bushes and on the other side of the trail were some Caroline Chckadees. A pair of Cardinals appeared briefly, then overhead a solitary Bald Eagle worked his way upstream. As we approached the Circle Avenue bridge, we saw a bright object perched on the bridge abutment. Peering through the binoculars, we could clearly see the blue crest of a Belted Kingfisher scanning the water for his supper. A very friendly tabby cat walked along with us for a while, rubbing against our legs whenever we paused.

We followed the trail to its termination on South Conestoga Drive. There we saw a Downy Woodpecker making a winter home in a dead tree, several Bluebirds flying along the distant tree line, and two more Eagles heading downstream. A doe foraged in the brush across the road. Canadian Geese are often found on this stretch of the river, but none were visible today. We did see a few Mallards paddling around.

I have walked this trail many times before and enjoyed the peaceful scenery but never took the time to look carefully at my surroundings. I was surprised and pleased to find such a variety of wildlife here within a half-mile of the city. I recommend the Greenway to anyone who is looking for a touch of the natural environment that is close by. But if you go, I also recommend that you do not use this as a place to talk on your cell phone. The Merlin app is a better use of that device. I have included the full list of species that we identified below.