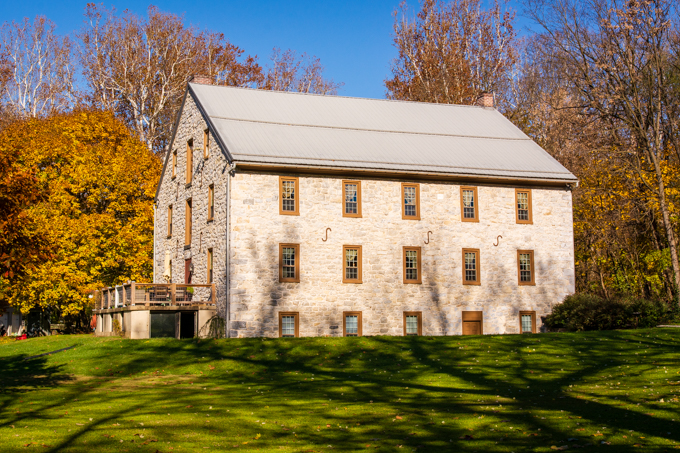 Welcome to Mill Monday! It’s time to feature another one of Lancaster County Pennsylvania’s water-powered grist mills. This week features the Chickies Roller Mill in East Donegal Township, also known as the Donegal Mill. There were three mills that were called “Donegal Mill” at one time or another, the Donegal Mills Plantation on Trout Run Road, Share’s Mill on Anderson Ferry Road and this one on Long Lane. To add to the confusion, there was another mill called “Chiques Roller Mill” in West Hempfield township. That mill is gone but the dam still exists.

Christian Haldeman built this mill in Donegal Township in 1837. The following year, Donegal Township was split into East and West Donegal. This mill ended up in East Donegal. Haldeman died in 1841 and the mill was purchased by John Becker. John Becker had been the miller at the Rothsville mill but moved to Chickies in 1854.  Becker engaged in milling and distilling for about ten years. Water for the mill came from a four-foot dam on the Donegal Springs Run. The mill was powered by an overshot wheel. Water returned to the creek via a 100-foot tailrace.

In 1845, Professor S. S. Haldeman, Dr. E. Haldeman, and others, built iron furnaces at the mouth of the Chickies Creek. In 1865, John Becker joined with a partner with the last name of Reinhold and converted the property into an iron foundry and rolling mill making muck iron for the Haldeman Company. In the 1870s, the town of Marietta was nicknamed “Little Pittsburg” because of its iron smelting businesses. The Haldemans ran two furnaces at the mouth of the Chickies Creek. The Marietta furnaces were located nearby. The Chickies Rolling Mill, as it was then called, became a major employer in the Marietta area. In the July of 1875, the Chickies Rolling Mill was running day and night and turned out over 280 tons of muck bars. The roller mill ran until the late 1800s when the iron business began to slow down. John Becker died in 1894.