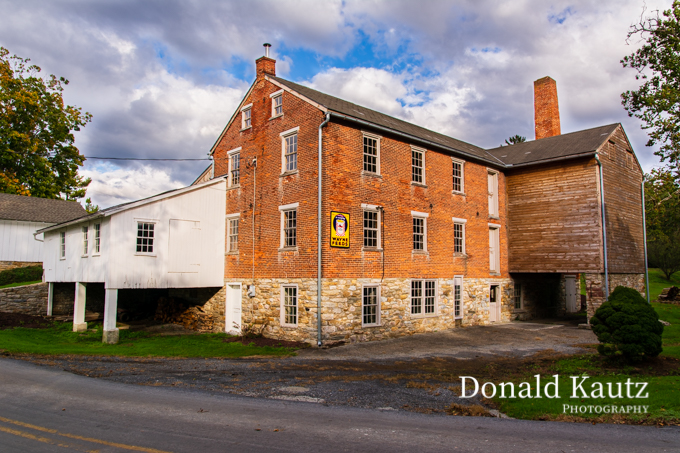 Welcome to Mill Monday! It’s time to feature another one of Lancaster County Pennsylvania’s water-powered grist mills. Today we visit the Calamus Creek in Paradise Township where the Highland-Rohrer mill has sat for 170 years.

The first mill was a small wooden mill built by Jacob Denlinger during the early days of Lancaster County’s formation. In 1834, Henry Rohrer purchased the mill from the Denlinger family. At this time, the mill was known as the “Highland Mill”. Henry’s son, Christian, took over the business in 1852 and replaced the frame mill with a new brick grist and sawmill. Power was provided via a 16-foot overshot wheel situated inside the west end of the building to shield it from the elements. The mill was enlarged at the east end of the building in 1879. A coal-fired boiler provided heat for the mill and even heated the nearby farmhouse by way of underground steam pipes. An eight-foot dam on the Calamus creek directed water into a 1,300-foot headrace. Two ponds collected water from the headrace to store water for the mill. The ponds would fill up overnight and provide enough water to power the mill during the day. The ponds would also produce ice in the winter and two ice houses were built to store the ice blocks. Sawdust from the sawmill was used to insulate the ice. A short, 100-foot tailrace returned water to the creek.

In 1917, Western Electric installed electrical generation equipment in the mill. The generator was run by waterpower and supplied light and power to the mill and surrounding buildings. Electricity was not available yet from public generation plants to these rural areas.

Christian Rohrer’s two sons, John C. and Frank H. took over the business in 1918 and operated under the name “Rohrer Brothers”. The mill produced 10-13,000 bushels per year during its peak in the 1930s. By now, the mill specialized in whole wheat flour and corn meal. The Rohrer brothers replace the wooden waterwheel with a new steel wheel that required less maintenance. A 15 HP diesel engine was installed to augment the waterpower. The diesel engine powered a hammermill and could be put into service to power the grind stones if not enough water was available to run the water wheel. Another interesting feature was a cable system that brought power from the mill up to the barn to run the threshing machine. The cable ran from the mill to a gear tower where the line made a 90 degree turn to continue to the barn. This tower can still be seen on the mill property.

John Rohrer’s daughter, Esther and her husband Christian Landis became the owner/operators in 1940. The Landises continued to produce whole wheat flour. This was popular with tourists visiting the area. They also sold corn meal to Kunzler to be made into scrapple. The mill produced 2000 bushels of stone ground wheat in 1983. The sawmill ceased operations in 1967 because it could no longer compete with modern equipment. Christian and Esther’s son James assumed operations in the 1980s. The output of the mill declined as demand for its products decreased. Then, in 2006, disaster struck. A fire started overnight in the vicinity of the diesel engine. The mill was fully involved before anyone became aware of it. Most of the east end and central parts of the mill were destroyed. The building was restored with the help of some Amish neighbors, but the milling business came to an end. In 2021, the farm and mill are owned by James’ son Keith Landis. The mill is being used as a workshop.

Information and photographs of this mill may be found on this website at https://donaldkautz.com/mills/highland-rohrer-mill/.