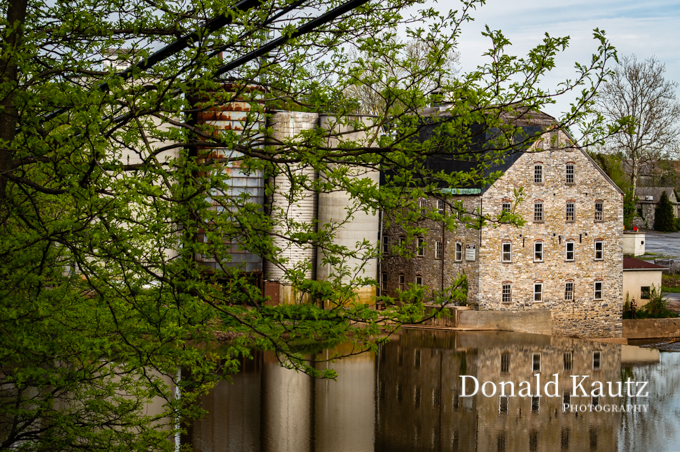 Welcome to another Mill Monday! It’s time to feature another one of Lancaster County Pennsylvania’s water-powered grist mills. Today we feature Zook’s (aka Bushong’s) mill on the Conestoga River in Upper Leacock Township.

In 1843, Joseph Elliot and Robert Russell built a covered bridge across the Conestoga just below the northern mill. It was a single span, Double Burr Truss that measured 195 feet long. It had a clear span of 180 feet, was 13 feet 8 inches wide and was 17 and a half feet above the water. It was at the time the longest single span covered bridge in the county. The bridge was replaced with a steel and concrete bridge in 1952.

In 1974, Roy Wagner purchased the mill and operated it to make flour for the pretzel industry. During this time the mill was producing 50 to 70 tons of flour per week. Wagner add additional storage capacity to handle the volume. Roy’s son Gerald took over after Roy’s death in 1986. Gerald Wagner registered the business as “Zook’s Flour Mill, Inc.” in 1986.

In 1998, Wagner sold the mill to Franklin C. and Frank L. Diem. The Diem’s converted the mill to generate electricity and renamed the business to “The Ironstone Mills”. The mill was causing issues at the Lancaster Water plant because of a drought in 1988. The mill pond took a while to recharge after running during which time no water was flowing downstream. The Diem’s agreed to alter their schedule until the water flow improved. The Ironstone Mills also produces wood pellets from sawdust for use as fuel.

This mill is located at 398 Snakehill Road, Bird in Hand, PA.

Information and photographs of this mill may be found on this website at https://donaldkautz.com/mills/zooks-flour-mill/