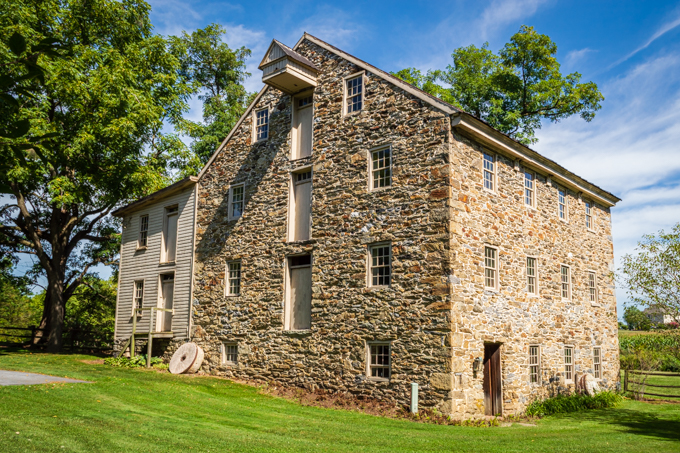 Welcome another edition of Mill Monday! Every Monday morning, I feature a grist mill located in Lancaster County, Pennsylvania. Today, I am highlighting Hershey’s Mill in Manor Township. It was common for a mill to be sold several times during its history. As the mill changed owners, the mill usually changed its name to reflect the new owner. The Hershey mill, however, remained in the same family for 130 years.

The water source for the mill was a twelve-foot dam on the West Branch of the Little Conestoga. A 500-foot headrace brought the water to the mill. The mill had what was claimed to be the largest internal overshot wheel in the nation, measuring 20 feet in diameter and 3 and a half feet wide. It had 96 buckets around its perimeter. The mill could process 35 barrels of flour per day. A 500-foot tailrace returned the water to the creek.

In 1931, the Philadelphia Museum wanted to move the building to another location to be reconstructed as an example of the architecture of the period. Plans were dropped for unknown reasons. It is not clear what happened during the next 30 years. Some think it was used as a summer home during this period. Darryl and Mary Sensenig bought the property in 1965. The Sensenig’s restored the house and mill as a hobby and had no intentions to turn it into a tourist attraction. The huge water wheel was still in place in 1965 but the lower part of the wheel that had been submerged was severely damaged.

Mary Sensenig was still the owner in 2020.

The mill is located at 363 Hershey Mill Road, Mountville, PA.

More information about this mill including more photographs can be found on this website here.